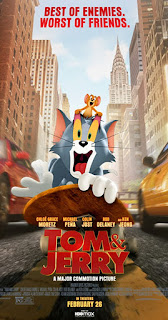 An early 20’s lady gets in way over her head when she takes on a hotel position during a wedding event, which is really just an excuse to set up multiple slapstick fights and jokes for Tom and Jerry, who star in this feature.

As a kid I’d watch a lot of cartoons, chief among them was a classic series focusing on a cat and mouse fighting each other, Tom and Jerry. Yes the beloved Hanna-Barbera shorts that most people would agree to be the most violent of the golden age in animation. While classic Tom and Jerry shorts are great, a lot of what’s been made since has been not so great, a plot for the two is easy to make, but the downside to that is that it means you’re stuck with a lot of basic plots that rarely fit a feature, or feel repetitive, or suffer if the violence of the classics can’t be replicated, completely or at all. Still it’s hard to hate the cat and mouse, and their longevity in the minds of kids means a reboot is never far behind, which brings us to their latest movie, simply titled Tom & Jerry.

Classic cartoons have never been the greatest subject for feature length live-action movies. Be it the misunderstanding of appeal, celebrities overtaking the spotlight, or just bad writing, live-action reboots tend to miss more often than not, which I initially feared would happen with this. Tom? Jerry? Why bring them to live-action? No one wants a realistic CG cat fighting a realistic CG mouse right? Well where my interest peaked was when a trailer leaked revealing that while CG would be used, the two would look as they did in the classic shorts, with the cg using cell-shading to make it look like 2D. I mean from a technical standpoint that’s impressive, and gives me hope that 2D will return to the big screen, in some form, but from a personal perspective I was just happy that they wouldn’t mess with the iconic look of the duo, make them generic rather than stand out. It was enough to hype me for the film despite the trailer showcasing live actors, so did it deliver? Yes, I mean it’s not great but it is Tom and Jerry.

Much like Godzilla features, this movie moves it’s plot along through the use of human characters setting the situations up for our leads. Our main actor being Chloë Grace Moretz playing a young woman named Kayla who’s in over her head, taking a position at a hotel after losing a job and finding out the hotel will be hosting a big wedding. Naturally she lies about her qualifications, leading to Michael Peña, the hotel event manager, to question her presence there. When a mouse (Jerry) enters the building and takes residence, Kayla offers to catch him with Tom; and I really should’ve explained this in the plot section. Anyway my point in repeating this is to explain that while yes we have another story about people we don’t care about moving the plot like in other reboots of family toons, this one is serviceable because it at least is about Tom and Jerry fighting. Yes, there’s a bland story, with bland characters, but it’s not awful, the actors all do fine for the most part (well maybe not Colin Jost) with only Peña and Rob Delaney really standing out, but even then in small bits. The blandness though, is there to set up the fights and the story is still ultimately about the fights Tom and Jerry cause,  much like Godzilla features so I can’t really complain.

This is a very simple and basic movie, and that’s fine, people forget that not all movies have to change your life, or be filled with depth. Sometimes we all need a nice laugh, sometimes I just wanna smile and Tom & Jerry does just that. It’s not a great movie, sure, but it reminded me of the cartoons I loved watching as a kid, actually reminded me of them, not like The Smurfs where I see them, but it feels nothing like the cartoons I liked. This was a pleasant time, and while a better film would be appreciated, I’m not gonna trash this when it did its job enough to make me feel okay for 90 minutes. I don’t do star ratings, I feel they take away from the conversation and can be iffy for judgement, but I think of this as a two and half star out of four movie, it’s fine, I had fun, I wouldn’t mind seeing it again, even if it’s not that special, if you love the cat and mouse, you’ll be satisfied at least.