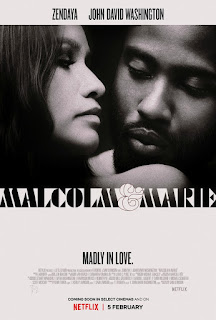 Malcolm and Marie return home after the premiere of Malcolm’s latest film. What follows is a night where the two argue back and forth about the film and their lives.

I try not to distract myself when I write reviews, I’m here for a purpose and that’s to critique what I just saw. What makes a review hard is when the film’s premise is so simple it almost comes off as basic and repetitive, this 90 minute exercise in two people talking, ranting, debating, etc. is just that. This isn’t to say there’s nothing to critique in Malcolm and Marie, quite the opposite, if you asked me about the performances? Great, Zendaya and John David Washington deliver, Zendaya especially as I’ve mostly seen her play kids, here she definitely shines as the mature (emotionally, even mentally at times) person of the pair. The cinematography? Brilliant, the black and white may be there to make it look artsy but I can’t say it doesn’t look good with the choice. So why don’t I like this more?

Now before we dive into the movie’s issues it is important to note that this movie has become a punching bag in some critic circles, which is largely due to Malcolm’s rants against critics. I can’t defend this movie regarding it’s tirade against critics, especially the white woman from LA Times, but I can say I can see the argument, I’ll get back to that white woman soon. Malcolm, as early as the opening minutes shows a disdain for critics, while this is meant to showcase Malcolm as childish, incapable of taking criticism, possibly revealing him to be a toxic, abusive individual, the problem is you can almost see director Sam Levinson nodding with his takes. It reminds me of the Family Guy episode of South Park, yes the episode admits Cartman is wrong, but you can also tell Matt Stone and Trey Parker share Cartman’s sentiments towards Family Guy. Yes, people are complicated, we can hold opinions that we know are wrong, but knowing they’re wrong requires an acceptance that we are wrong, Malcolm can be painted as wrong and childish, but as long as the film acknowledges he has a point, as long as the director seems to believe he’s providing some brave insight, the film’s view on Malcolm’s toxicity on that front will feel half-assed.

Now this isn’t to say Malcolm and Marie has nothing worthwhile in it’s rants, quite the contrary, critics are not perfect, myself included, and worse still you can see some of Malcolm’s points with high profile critics. Malcolm calls out the racism found in many reviews, which regardless of what they say, it’s there, the phrases, the contradictory in certain approaches, the choice to make every view point based on race even when it was intended to be universal, all fair points. The problem in how this movie approaches race stems from the whiteness of the director, while I will not pretend to be an expert for black people, I can tell within many of Malcom’s rants that neither is Sam Levinson who wrote the rants. Yes he brings up a few good points, but the bad points, and sometimes even how those good points are presented sound like they come from a very white point of view. Malcolm’s cry for his films to not be politicized, to not have race be the focus are not entirely bad (though technically politics are everywhere, but I get what he’s trying to say), but the presentation of said points sound less like a black man wanting to be free of a box film critics placed him in, more like a white man not wanting to think of serious subjects all the time. Add to this how we’re supposed to side against Malcolm most of the time and suddenly we have a confused stance that Levinson believes in yet we root against because as Zendaya realizes, he’s being a childish selfish being.

Of course if you had any questions about whether or not the director is fully committed to his stance on critics, or just mad about the ones who gave him negative reviews for his last feature, Assassination Nation, well just notice who gets singled out. While the name is never given, early in the film Malcolm insults the white lady from the LA Times, one of the negative reviews for Levinson’s last film came from a lady critic who worked at the LA Times (though she no longer works there). It’s just so petty to constantly attack someone for writing a negative review on your work, maybe she’s full of it, but that’s no excuse and it’s a weak reason to go after film criticism in general. The film returns to the character later in the film, after so many instances of Malcolm being childish, to once again dump on this person, sure it’s meant to reflect the overall problems of film critics, but that it’s targeting a specific person makes the critique feel more like cruel remarks. If I’m completely honest if you need to see a movie critique critics, just watch Ratatouille, it does a better job of it and is a great movie on it’s own.

Critics aren’t above criticism, in fact it would be nice to see a truly great film critique the modern landscape of film criticism (Ratatouille is more in general about it) but this movie just can’t hit the mark on that. While I watched this movie the past weekend, I witnessed “film Twitter” argue about Auteur Theory, complaining to a POC in the business who decided to call it out for the problems it’s brought. While I understand that said person’s take (I choose not to say the person’s name to avoid adding fuel to the fire) was broad and simplistic, I did get where they came from on the matter and I did get that the take being in the form of a tweet meant said person’s take was a very broad summation of their stance, meaning people really shouldn’t get too bent out of shape about it, or assume the person has no understanding of Auteur Theory, so “film Twitter” of course had to defend Auteur Theory from the mean POC. Calling the person out for their work because of their take, acting like those who agreed had no understanding of it, complaining that people need to know it to be in the business, defending an idea that is not going away any time soon, and even if it was, this person had no control of that, let alone one tweet being the definitive written piece that explains everything in said person’s mind about the subject, it was ridiculous. That needs to be called out, critics engaging online to cruelly trash anyone suggesting that some parts of film criticism and how we approach the knowledge therein needs to be addressed is what the movie should be calling out, the idea of certain harmless takes getting critics raging should be satirized, it’s a shame this movie didn’t zero in on that.

Malcolm and Marie is well shot, well acted and not at all bad conceptually about what it targets, however the arguments are weak, the critique on criticism is limp and I kept wishing Malcolm would shut up long enough to realize how stupid his arguments could get. I wish I had seen a better version of this, a drama where two characters argue could be great, there’s no reason to believe otherwise, but as is it’s a shallow film that wants to make a point, but can’t because it’s too busy railing against someone who give a bad review once. At best it’s a demo reel for the actors, at worst it’s a reminder that people had a lot of free time during the pandemic to make misfires like this.