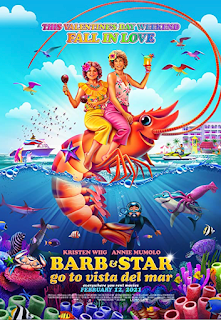 Barb and Star go to Vista Del Mar, crazy things happen and I don’t want to spoil it for you.

You ever feel like we’ve been missing out on something we needed despite not knowing we needed it? Anyway, the theaters have been closed for nearly a year, which has led to a bunch of delays. Movie after movie, pushed further and further down the road, all while the audience starves, oh sure some movies have gotten released, some that would’ve been better on the big screen. However the theatrical experience is more than just seeing a movie in a huge screen with more detail, The Avengers wasn’t better on the big screen because it looked bigger (though that is great) it was better because you had an audience cheering, roaring when the great moments came. So far I’ve yet to see a movie released during the quarantine that has made me wish for the theater experience that bad, at least that was true until I saw Barb and Star Go To Vista Del Mar.

At first glance, I wasn’t expecting much, the trailer confused me more than it wowed me, but I’d be lying if I said I never thought of it after that initial viewing. For over a year I thought about this trailer that confused me, “who are Barb and Star? Why are they not showing their faces?” It certainly is a memorable one, not bad just... what? So upon finally releasing (delayed due to covid) I found so much love being thrown it’s way by others, and while I’ve tried to avoid renting features due to the cost, the constant praise broke me down, which I’m thankful for. Barb and Star is definitely a weird movie, it’s trailer sold the movie just right while also barely doing that, it’s bizarre but in all the right ways that even the confusing trailer could not prepare me for... yet somehow did. To say I love this movie feels like an understatement, it just feels so fresh, I can’t properly explain how badly I wished I’d seen this with a crowd. How would I react in a crowd to the amazing “Edgar’s Prayer” sequence? Now I’ll never truly know and it’s a shame, because it’s one of those moments that you know an entire audience of unsuspecting people would go wild for. Still, at the end of the day I’m glad I’ve watched this, for a movie that never sold me in it’s trailer, I can’t imagine what might’ve been if I had avoided it purely based on that.

What ultimately made this movie so charming for me is just how confident it is about it’s own silly, dumb premise and world. Barb and Star effectively sets itself in a fictional world where anything can happen, but the dumbest thing you can think of will happen. It’s very much like classic parodies from decades past, in terms of comedies I was mostly reminded of things like Zoolander, Austin Powers and Popstar, which I’m sure will convince some comedy fans to watch it now. Notice how two of those three movies aren’t incredibly recent though, it’s crazy how rare it is to see a comedy that just runs wild with logic these days, which is a major part of the appeal I had with this, at no point did I think I should take it seriously, but I’m glad the characters did. It’s such a rare treat to find movies that are fully invested in their own worlds and even when they’re not great I just appreciate the commitment, I’m definitely glad this one commits. While I refuse to give away the details, what at first glance seems to be a regular comedy about women on vacation, quickly turns into a film where a mastermind plots to destroy said vacation spot  for reasons I choose not to explain. The reveal comes fairly quick, but the title and again trailer, did nothing to clue me in on what was really in store for me, I love that.

Ultimately, what makes the movie so charming is the cast of course. Annie Mumolo and Kristen Wiig star as our funny duo, Barb and Star, respectively, and they play off each other well, in fact they’re so good that even apart (which happens for a chunk of the feature) the pair are enjoyable, Wiig even plays another role in the film and she’s great in it, being a more “serious” character than her lead role. The two have their phrases, their shared interests and character bits, even a shared favorite name, which provides a lot of fun character traits and humor, making them some of the best comedy duo acts I’ve seen in years, it’s honestly hard for me to find a flaw in their act, I love Barb and Star in this movie, I’d gladly watch more (even if I doubt a sequel could capture the same energy). Eventually the movie finds its secret weapon, Jamie Dornan as Edgar, a performance so good that it manages to steal the show despite leads who are practically grabbing onto the spotlight. Barb and Star both provide hilarious quotable lines, but as strong as they are, Edgar walks away with the most memorable scene in the film involving a power balled and seagulls, it feels like I’m making this up, but I swear it’s a thing that must be seen, both to believe me and because you’ll love it. The rest of the cast are largely guest spots of funny people doing funny things I really would not spoil, but one other highlight I will mention is child actor Reyn Doi as Yoyo, the trailer had a funny bit with him, but the movie delivers something more wonderfully absurd from him. Overall the absurd plot works as well as it does because of a game cast that delivers the job perfectly, with a pair of lovable leads and a scene stealing, lovesick moron.

I know, I should just add a “spoiler warning” to talk more about the weirder plot elements, but this is a movie worth experiencing for the surprises. Barb and Star Go To Vista Del Mar is a wonderfully silly film that respects it’s audience tolerance for absurdity. It’s the kind of movie that’s best watched knowing as little as possible, I loved the entirety and if it were up to me I’d nominate it for Best Picture, or at least best song for Jamie Dornan’s song in the film.