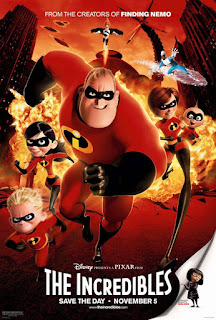 Okay lets be honest, who hasn't been thinking about this movie recently? With the popularity of superhero movies, a poorly made Fantastic Four movie out now, and of course the first poster for the upcoming sequel, The Incredibles are popular once more. I've been wanting to do a post on these guys for a while now, and the timing just couldn't be better. If the title didn't give it away, yes I'll be discussing the famous cape sequence of the film

Despite the amount of superhero parodies out there, not a single one has ever perfectly mocked the costumes they wear. I think the most common joke at the expense of a superhero's fashion is the wrestling trunks (underwear) being a silly looking thing, here we focus on the cape, an addition that is honestly pretty useless beyond being a neat looking piece of the costumes, and the result is golden. I love how the movie makes it clear that capes are cool to look at, the real issue is that they're dangerous to have, in fact it's fair to assume your dead if you choose to wear one.

This is one of the major things that scare me about the sequel, this scene is comedy perfection, this scene is one of the most perfect satirizing of the superhero costume sequences I've ever seen, how can the sequel possibly top this. I know it's silly to measure the quality of a movie based on a scene from its predecessor, but I'd honestly mark it down if no scene comes close to the observation you've just witnessed.

Edna Mode's no cape rant is one of my favorite scenes in any Pixar film, how can I not love a scene that unashamedly mocks the genre it's paying tribute to in such a dark manner. Of course one of the biggest reasons of why it works, is that it ends up playing a major part in the film, foreshadowing the climax, while still leaving a big smile to anyone who's ever thought to ask what exactly is the point of the cape, the answer here is a cool, but ultimately bad fashion choice. I love how the film pretty much hammers in what's going to happen to a certain major character (as if I even need to hide it) yet still manages to pull a few twists and turns as to how we get there; perhaps the trick was to have this happen early enough, that by the time the plot starts picking up full steam we kinda forget the obvious downfall that's awaiting said major character. Edna Mode spoiled the movie, yet we didn't mind, partially because we assumed it was just a humorous, unnecessary jab, but largely because it was a really funny jab at superhero fashion.

The Incredibles is a Pixar classic, but this scene is a masterpiece, the superhero genre has had a lot of comedic scenes satirizing/mocking itself, but this is the best version of those scenes, it's perfect.