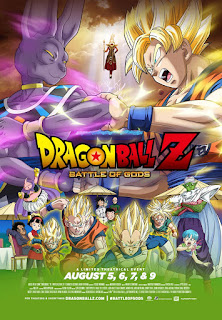 Synopsis-Goku and friends face a foe deadlier than any before, Beerus, the God of Destruction, with little options available to defeat him, our heroes will have to force a Super Saiyan God to challenge him.

I'm not even gonna pretend I'm a huge fan of Dragon Ball Z, granted I was in my early childhood, but now I'm just not, well, it's complicated. In general, I've always preferred Dragon Ball over its continuations, the adventure, comedy and characters were just more entertaining, DBZ was just filled with long fights, most of which ended up feeling boring or uninteresting; I'm probably not the right person to review this considering all that, yet surprisingly, I really enjoyed Dragon Ball Z:Battle of Gods, at least in most areas.

If you read my previous posts, specifically my 100th post, you'd know I'm not a big fan of anime, in fact I went as far as saying I hated it, which is true to an extent. While I may dislike most anime, there are a select few I do like, because like most human beings, I can dislike a large group of things while still admitting to like certain parts of it, like Dragon Ball, which still sits in my book as one of the best, despite a lot of that joy being lost on DBZ. So why did this movie stick out? Besides it being the return of Akira Toriyama (the creator) to the franchise? Well the fun is in control most of the time.

I may be in the minority, but to me, DBZ was at its most fun, when it just focused on silly characters and silly moments, Hercule is one of the best things added to the series, without a doubt. I believe the action was fun at times, but nowhere near as entertaining to watch when the show would stop to just be about the interactions and the characters; to easily understand where I'm coming from, I believe Emperor Pilaf is a better villain than any introduced in DBZ, simply because his entertainment is more than just "look he's so evil and strong and hardcore".

In this film, while there are action scenes (the film at its least entertaining), the best moments come from the comedy and seeing these characters again. The voice cast are all solid as these characters, making the interactions joyful, while the animation is neat to look at even if you're not too big on the anime art style much like myself.

I really do mean it when I say the movie works best outside of the action, while the fight scenes are nothing too memorable, the lines, comedic moments and character exchanges are the highlights. Hours after I've finished watching this have gone by, and I still have many of the lines stated by Hercule, Pilaf (yes his gang is back and they're the scene stealers) and even newcomers Beerus and Whis in my mind, they're just that fun it's hard not to remember them. The great thing is how little of this film actually revolves around the fight, oh sure it's the main focus all throughout, but the actual fight being talked about only comes in until the last 20 minutes, most of the film revolves around the celebration of Bulma's birthday, which feels like a meta celebration of the reunion of these characters.

Watching this reminded me of the joy these characters can be when just hanging around, seeing the world being threatened because Majin Buu wouldn't share his pudding is hilarious. While the joy is lessened by the fighting sequences being nothing too spectacular, I just can't walk away hating this, I smiled too much. Dragon Ball Z:Battle of Gods won't do much for newcomers, but the joy is too much fun for longtime fans, casual viewers, or like me, it feels like a good step back into the zany world of the original Dragon Ball, despite eventually becoming the boring action fest of DBZ, I recommend it.