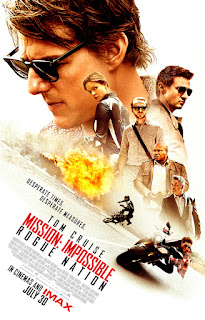 Synopsis- Ethan Hunt finds himself alone after the IMF gets disbanded as well as an encounter with a deadly group known as The Syndicate, with the help of some old friends, as well as a mysterious disavowed British Agent, Ethan may find himself in his most impossible mission yet.
I must repeat for those who haven't read my review of the previous installment, I haven't seen the first three films, I thought about doing so, but it just fell off my schedule.

Going by what people have said about this series, it really does seem to improve with each new installment, which is to say that Mission:Impossible-Rogue Nation is better than the only installment I've seen so far, Ghost Protocol, which according to fans was the best up to that point. I think the main strength here comes from the team, I'm told that this is the first time in the series were Ethan has a team comprised of former team members, rather than just have one or two, which is believable as this team seems to have more camaraderie to it than the team in the prior film. Of course the action is also improved, feeling more real and dangerous, the main stunt advertised in the film may just be the opening, but the stunts throughout are plenty and fun. I think the cast really stepped it up this time, yet another reason why this film improves upon it's prior installment.

Everyone may mock Tom Cruise for his weird antics, but when the man kicks ass, he is really awesome, here we see him as Ethan, but from what I know of the first three films, as well as the prior film, it seems as Ethan is more human, he takes pain more often, making him more heroic when he comes out on top. Jeremy Renner feels more connected this time despite being the character who isn't meant to have much connection to the team, he helps give the film a sense of mystery as his character begins to have conflicting thoughts on the problem. Simon Pegg returns as Benji Dunn, who really should be considered the franchises MVP, he adds a lot of the heart to the team and the film. Only one actor has appeared in all these films (aside from Cruise obviously), Ving Rhames, he adds a lot of comic relief, though I think his appearance here would be more special to me if I had seen each installment considering he played a very small part in the previous installment. Rebecca Ferguson joins as a mysterious agent, Ilsa Faust, who is a great female spy, in a way she feels like a younger Ethan Hunt, but a bit more mysterious in her alliances, she's a great foil for Cruise. We get a fun, soft spoken villain in Sean Harris as Solomon Lane, while he may not seem much intimidating at first, he gets more threatening as the film continues on. Rounding out the main cast is Alec Baldwin as a CIA director who has issues with the IMF along with Ethan, he's fun, feeling a bit like a red herring villain, but nonetheless works by the end.

As far as action movies go, this is definitely one of the best this year, there is plenty to enjoy, whether it's the opening jet sequence, or the motorcycle chase, or whenever we see hand to hand combat, this movie excels. Tom Cruise is at this point the best stunt man in big budget Hollywood films working today, there is a real sense of tension all throughout, by the time we see how much in pain he is for the final battle we understand how tense and human he is at that moment. Of course the supporting actors get in the fun as well, despite this being Tom's vehicle, Pegg, Renner, Rhames and Ferguson all have their own moments that shine,the first half of the chase has a lot of fun with the guys, but Ferguson is awesome in all of her action scenes, is it too much to ask for her spin-off? I hope not.

This may be popcorn entertainment, but it's popcorn entertainment of the best kind, it's for everyone, even non-fans of the series. I don't think it's the Summer's best, but it definitely earns a spot on that list. Mission:Impossible-Rogue Nation is a must watch film, the action is exciting and the story is intriguing, watch it immediately.