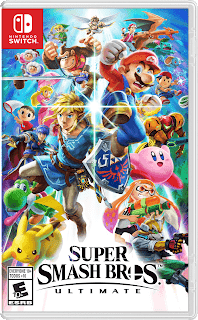 Is it the Ultimate installment?
To say I love Super Smash Bros. Is an understatement  I don’t just love it, it’s easily among my favorite video game franchises, in fact it’s my favorite fighting game. Now just to be clear, I’m not much about the mechanics of games, sure I like a polished game, but I’m more about the personal experience, things that made the game stand out beyond the graphics or how technical the move sets are. So if you’re wondering which installment is my favorite, it’s easily Brawl, sure it’s not as fast as Melee, nor is it the biggest roster in the series, but the story mode made it feel bigger than ever before. How does Ultimate stack up? Well it’s certainly a worthy addition to the series.

Touting the biggest roster, in fact the first time no characters have been cut since the second installment, there’s definitely a lot to work with. Personally I was hardly wowed by the newcomers, at least upon announcement, but I’ve found each to be delightful additions, with Incineroar being a favorite. Going beyond that, there’s definitely a lot charm to be found with everyone included, sure some characters I hardly touch, but the smallest of changes to previous fighters make them fun to revisit. A big addition to this game is the concept of “echo fighters” an idea we saw in the previous installment, fully fleshed here. I like the idea, including more fighters, even if similar, but a part of me wishes they had tried making them a tad more different, after all, if Pichu, Dr.Mario and Ganondorf could be slightly altered to feel like their own fighters, then why not put some more time in the few fighters we have in this category, especially when Dark Samus, Chrom and Ken are allowed to be slightly more unique. That all being said, there’s no denying the roster feels amazing, so many characters, so many with small enough touches to be excited for, I cannot stress it enough when I say that Ganondorf, Young Link and Pichu were fun to play with despite being fighters I disliked in the past.

So what about “World of Light”? Well it’s fun, I can’t say I was hooked on it, but I did enjoy running through it. The issue for me is that the intro (now infamously memed to death) sets up a new “Subspace Emissary” but really it’s Event Match mode but on a game board with RPG elements. I’ll admit that the game board occasionally has fun puzzles, but too often it’s just a repetitive series of walk into the next challenge, hope you’re on the right path and look you found a spirit needed to move on to the next area. I like the fundamental idea, but I really would’ve preferred some more platform if, or unique puzzles at least, as the fighting gets too repetitive with only so many variants of knocking the opponent out. For many there’s also a complaint of a lack of cutscenes, which I understand, but I honestly would’ve been able to ignore, had they at least implemented the dialogue on the game board, sure I prefer scenes, but if Sakurai had decided to use the method he had in Kid Icarus:Uprising  I would have been fine. Without any cutscenes (aside the intro and small snippets towards the end) or at least running dialogue throughout gameplay (I know I’m alone there, but I dug it) the story feels non-existant, leaving for little to warrant a full run through besides the fighting being fun. Still, without giving much away this one does have a delightful treat towards the end for longtime fans.

Funny enough the area where the game shines most is in it’s classic mode. Each fighter gets a unique series of fights that relates to their history, background, or personality, right down to having different final bosses. While occasionally I did yearn for more diverse bosses (with over 70 fighters, it’s odd how often Master/Crazy Hand show up, I mean no Pokémon boss? Or Andross? Kraid? Anyone really) I found the journey to always be fun, despite the boring bonus stage this time around. So much love was put into this I honestly went through it all before even getting deep with the World of Light, not just to unlock fighters quicker, but because I was always curious if I’d get the references being thrown.

Is this the best in the franchise? From a roster/technical aspect, sure, it’s huge and balancing it all took so much I’d assume. From an experience, it’s only the second best, I would’ve preferred a much grander story mode is all. I appreciate what series creator Masahiro Sakurai provides here, and I don’t want to sound demanding, because I get this is a ton of work, but if I am honest the story mode could’ve been better. I’m grateful for what we have, ecstatic even, but it’s still just my second favorite in the series.