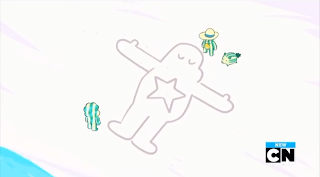 Well this was a very well told episode.
Contrary to what you may believe, no, I’m not against episodes that provide a nice break during an arc. I prefer they don’t do that, but a well-written break, or one that still ties into the arc in some way? That’s welcomed. In the case of this episode, it’s still involved with the arc, it’s just a small experimental (so to speak) detour before the storm that’s coming.

Picking up where we last left off, Stevonnie is trapped, unable to break through and fight back against the tyrants of Homeworld. After some doubt, Steven decides he must call upon the lone Gem that has yet to be poofed, Bismuth. Using his powers, Steven transports his mind to Earth, finding himself as a watermelon again. In a cute scene of seeing just how much they’ve progressed, the bulk of the episode is near silent as Steven tries creating a raft to journey home to ask for help.

It’s a fairly simple set up, one that is a breather for what’s clearly gonna be a massive season finale, but it’s cute and entertaining. Just seeing how the watermelon Stevens continue to progress is interesting enough, but I dig that the episode avoids dialogue all together on Earth. Sure it’s a call to help, which will factor in the next episode, but given how the episode mostly focuses on the journey home, I’d imagine some fans might dislike that we aren’t at the intense moment just yet. Personally, this is a break from the action, but it’s well deserved this time and makes for a fun visual heavy episode.

There’s honestly little that I can say, but I hope the show keeps this momentum and pulls through for an excellent finale.