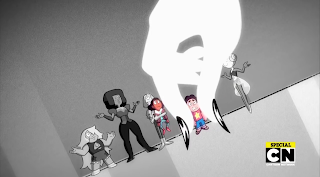 It’s finally here, the series finale... I mean season finale...
I’ve had a rough relationship with Steven Universe, it’s a fine show, but so much of it is... not. Don’t get me wrong the characters are fine and the premise is solid too, but the pacing, the character development and the overall message is flawed to say the least. Where does this series, I mean, SEASON, finale land in? Well it’s pretty much perfect... except for the overall message.

Beginning with everything having been lost, Steven and Connie are still locked up, while Blue finally begins to understand Steven’s issue with Homeworld. The realization of abuse leads to Blue deciding to help Steven escape, which is cut short as Yellow decides to fight against this. After much discussion, Yellow begins to side with our heroes, only for White to finally intervene, resulting in our main struggle of the episode, convincing White to help, not hurt. From there we get some cool fusions, some neat reformed reveals, some intense moments and a terrific metaphor for Transkids... so what went wrong?

As said before this is a pretty perfect finale, to a point that it works as a series finale with all the loose ends tied neatly. My problem is in the overall theme of the show, talking through the issues, an admirable message, but sadly one that’s not always realistic. While the show has built some time to allow Blue and Yellow to change, White’s change feels way too sudden, more importantly I wonder if she deserves to change? Again, it’s admirable for the show to teach kids that with enough talk even the worst of people can become good, but as we’ve seen a lot recently, that’s just not the world we live in sadly. White’s constant demands that Steven drop the act and be Pink calls to mind a bigoted parent asking their child to stop “pretending” to be the other gender, with the end result being an amazing scene solidifying that Steven is who he is, so White just has to accept it. It’s great and I’ll admit it works as you watch it, but sitting on it, I kinda wish the end result would’ve still had White deny it, ultimately leading to her downfall. I can’t speak on the creator, Rebecca Sugar’s experience, perhaps White and the forgiveness is a real reaction from her life, or even a wish fulfillment version of a personal struggle, but I can say the sad reality from what I’ve witnessed is always worse, but the good thing is that the harsh truth can lead to better places. Sometimes people are forced to cut ties with close family members when it becomes clear said family member won’t accept their status as a trans person, or maybe their sexuality, or something else, it happens, it sucks to know your father, mother, whoever is horrible, but then again it’s life and cutting ties with those who hurt you is an important thing to learn. Is it easy? Not always, especially if you depend on the person hurting you, but expecting them to one day change when you no longer need them is just gonna hurt you, sometimes people change, but not always and that must be taught more often.

Despite my issues, this was a phenomenal way to close the season, hitting so many emotional marks, as well as some badass imagery (did I mention one fight is like Shadow of the Colossus?) and character moments. I do have to wonder where the show goes from here, it’s pretty much a perfect way to close the show, so I do worry for the future of the show. That being said though, perhaps the anime influence should be a clue to where it may go, after all so many shows skip into adulthood, or explore the next generation, which might be where this heads. Either way, a solid close to the season, even with my issues. This season gets a 3 OUT OF 4