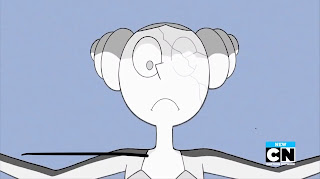 I don’t think they’ve thought this through.
If you read my last review you’d know my disappointment in this show, it’s not that I dislike it, I just dislike the choices being made. I get it, the creator wants peace as the solution to everything, that makes sense, but at a certain point I do feel like there’s a limit to it, not everything gets solved that easily sadly. Moving into this episode I was actually impressed that we get to see the Diamonds acting cruel again, maybe it doesn’t last, but for this episode it works.

Picking up where we last left off, Steven is ready to make a ball, bringing inspiration and hope on fixing the damaged Gems of Earth. Managing to bring out some of his own decisions, the Diamonds (as well as their Pearls) keep the party under a specific guideline, resulting in a pretty stale time. Everything crashes though once Steven accidentally fuses with Connie, resulting in an outrage from the Diamonds (except White, who had her Pearl attend in her place) wherein Stevonnie is left alone.

Getting the bad out of the way, I don’t like how abrupt the episode ends, I’m not saying it needed a full resolution here, but I do wish there was a smoother cut to the credits. This is a problem the show tends to have, episodes just end without proper build up to the closing, here I was wondering if my WiFi crashed. It’s not like it even needed much, seeing Yellow destroy all the fusions (which included a new Gem) was a strong way to close, it’s just seeing it end with a quick door shutting on Stevonnie felt like a pretty poor choice. Why not get one final reaction, a “shoot we might need to work on our plan” moment, here the ending is just “oh no the Diamonds are mean” but with no smooth way to sink in the moment.

The good however, is that this episode feels a bit more like the show understands that you can’t just turn a dictator nice with a few kind words. I doubt the show does complete justice here given it’s track record, but I can admire that it still reminded us that yes, the Diamonds hate fusions, they are bigots in that regard. The reveal of Stevonnie elicits perfect reactions of fear and hate, that stuff works. I also liked that we get to see Steven influencing some, it reminded me a bit of WALL-E, in that Steven is injecting personality to the other Pearls and as mention before a new Gem, which fuses in his defense, I wonder where they might go with that. Before I close this, one more good thing is in the weird dream, wherein White Pearl is Pink’s, could this lead to an interesting twist? I hope so it certainly has potential, my guess is that she may be the one running the show out of some vendetta of sorts. In any case definitely a step up from the last episode, I don’t think the momentum will be kept, but I hope so.