Support me on Patreon. Enjoy!

A lot of remakes get a bad reputation, whether it's for sucking or not being as good as the original,remakes are just not well beloved; but every now and then we get a remake that far surpasses the original in quality, take a wild guess at what kind of remake I speak of today. 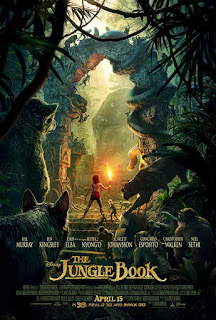 This isn't Disney's first stab at remaking one of their animated features, in fact it's not even their first attempt at remaking The Jungle Book, (that goes back to 1994) but this remake is the first one to actually be superior in comparison to the original, I find myself surprised to admit that, but there's nothing I'm more sure of about this movie than that, 2016's The Jungle Book is better than 1967's take.

Let's back track a bit on that statement, Disney, is by no means a stranger to remakes, especially to their own films, given that we hear new ones getting green-lit every other month, but most of the time, they are no different than most remakes, quality-wise. As someone who has seen most of the Disney remakes, I can safely agree with that statement, 2010's Alice in Wonderland, was a steaming pile of garbage, Maleficent, was an interesting, but ultimately disastrous misfire, last years Cinderella, was good, but nowhere near as much as the original, and the aforementioned remake attempt of The Jungle Book, was fine but ultimately forgettable. Prior to this film, the only Disney remake that actually fared well when compared to its original, was 1996's 101 Dalmatians, which even then, I'm not entirely sure if it is better, it just has elements that feel close enough in quality. This take of The Jungle Book, is the first time from Disney, that I feel confident in its quality to say it's superior, parts of it admittedly are lesser in comparison to the original, but taken as a whole, I absolutely loved this version.

The biggest improvement this version brings, is within the story, which is still not very faithful to its source, but feels more complete and properly told this time. While the original movie is still a good movie, its biggest flaw was a lack of real structure, there was a plot, but the focus jumped around so much, that the saving grace was the characters (we'll get to them) in the movie. I'm not gonna pretend the story is perfect this time around, but the beats feel more natural, and the conflicts are put together in a way that feels like an actual story is happening, and not just a series a vignettes being put together to create a story that isn't really there. I'm not trying to trash the original mind you, it just doesn't hold up as well as it could have if the characters and music weren't its only strengths; basically the story in that version is just "Mowgli lives in jungle, Shere Khan lives there too, Mowgli must leave to avoid Shere Khan, Mowgli meets Baloo, Mowgli encounters various dangers and animals, eventually Shere Khan finds Mowgli, Mowgli scares Shere Khan with Deus Ex Machina fire branch, Mowgli leaves jungle for no reason besides hormones", which admittedly doesn't sound too bad, until you see it and realize that Mowgli has no reason to encounter all those dangers, besides it padding the story, and the resolution just feels like the writers couldn't think of much anymore and just decided to end it somewhere that felt like an ending. The encounters in the new version feel a bit more seamless, and the ending this time feels a bit more earned,without giving away much, part of that seems to be because director Jon Favreau, knew what details to add, so those encounters felt necessary to the film, while also deleting, or changing whole parts of the story to make sure the details would add up properly. From a story perspective, the only thing that feels useless to the story as a whole here, is the odd scene where this movie decides it has to be a musical, which even then is not bad,given that we get a good version of "I wan'na be like you" out of it.

If the story were the only area where this movie succeeded, there might've been more of a debate over  which version was better, but thankfully, this version  also features a great cast of characters. The only characters that I don't feel confident in saying they were better than their '67 counterparts are just Bagheera (Kingsley is good, but I loved the expressions on the original too much) Kaa (aside from Scarlett Johansson doing a sexy rendition of "Trust in me", I saw no reason of her being here) and Shere Khan (great take, but I kinda find myself more partial to the egotistical, almost sarcastic take of the original, mostly because it made him more frightening when he would snap), but aside from those I really loved the new versions, which is not a common thing for me to say about remakes. Special credit must be placed in Neel Sethi, as a kid actor who only had cg creations to react to, he does an excellent job, and comes off less annoying than his animated counterpart (I am not too fond of animated Mowgli honestly), but his friendship with Baloo (voiced by Bill Murray) is the best thing here, sure I loved the classic Baloo, but Bill is perfect here, and the effects used to create him (or any character in this movie honestly) are the most impressive I've seen in a while for a movie. After the charming Baloo, Mowgli also interacts with Christopher Walken as King Louie, this version is odd for a number of reasons, but Walken kills it, making for a frightening yet much more entertaining version of the character, who is now a gigantipithocus for no reason, but because Orangutans didn't really live in that part of the world. I know I'm probably not being specific with the characters here, but that's because it's easier to experience them, than to explain them, for example, going back to Baloo, his charm comes from both the effects creating him, and his personality, to explain any further, would be to give away some of the humor (like how we're introduced to him, which is one of the best introductions I've seen in a while), which I don't feel is fair to people who have yet to see this movie.

I loved The Jungle Book, the story, characters and effects give an entertaining experience I never expected from it, even when I expected this to be good. I'm not in the minority here, when I say this is the superior version, the rare remake that is fantastic, or that it's a good movie on its own, which always makes me second guess my opinion, in case I'm being swayed by the popular opinion, but I remain confident with this one. This isn't the best version of The Jungle Book to date, it's Disney's best remake to date, it's exactly the kind of movie that shows what can happen with a talented, dedicated team, if you had reservations about watching it, drop them, you're gonna love this movie.