It's not often I see a movie on the big screen completely alone, but hey, at least that means my opinion is in no way influenced by the audience right? 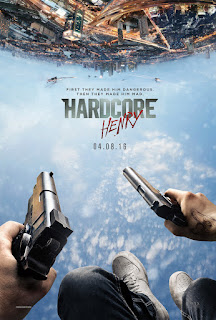 Let's get one thing straight, despite Hardcore Henry, or rather the marketing, insisting it's the first movie of its kind, it is not, there are a few movies out there that have employed the first person gimmick all the way through, now if the question is whether or not it's the best, well that's a bit harder to answer. Make no mistake, I really enjoyed Hardcore Henry, and considering I never got tired of the gimmick, yeah maybe it is the best of its kind (keep in mind my only other reference here is mainly found footage films employing a variation of this), because anytime I thought I was getting tired of the gimmick, the movie found a new way to keep it going. I'm not sure if audiences will ever connect to "first-person" movies, but if they do, I hope this movie becomes the standard of how to do it right, because at a brief 90 minutes, Hardcore Henry, makes sure you get as many money shots as you can get out of this, basically, the movie takes advantage of its perspective by showing action beats that look more spectacular in that view, that doesn't sound like a possibility, yet it is. If it sounds like this movie is mainly a gimmick with little substance, that's largely because it is, but trust me when I say it's a fun watch, plus that little substance really goes a long way (despite being subtle) when the movie reaches its final act, sure the twists become obvious, but in a way, it feels like the kind of twists gamers would go crazy over, which seems proper given the film seems to be mostly inspired by modern triple A games.

Hardcore Henry is by all means a straight forward story, you, or Henry must get from point A to point B, while fighting bad guys, to rescue the damsel in distress, which would be a bad, thin, generic plot in any other movie, but here it feels right, this isn't meant to be a deep movie, it's just a movie showing off a gimmick, and the best way to show off a gimmick is by focusing on the spectacle. I'm sure many will criticize that sentiment, but from my point of view, it feels right, using the first person gimmick for something less spectacle driven will feel pointless, because, why shoot in that position if you've got nothing to amaze the audience with it. I want to make it clear, I've got nothing against a gimmick movie having a lot of depth, after all, The LEGO Movie was a gimmick movie and that had a lot of depth, but the thing is, Hardcore Henry is running a gimmick wherein you, the viewer, create the lead's personality in a way, so the depth will have to come from whatever trope it makes a statement about, which unfortunately won't be much, because the games industry is still young enough, so that much of the deconstruction there may seem revolutionary within a game, but when compared to movies that pretty much do the same kind of deconstruction, it feels kind of bare-bones, no matter how deep it appeared in the context of games. What I'm getting at, is that if Hardcore Henry were a game, yeah, it feels incredibly deep, but as a movie, and as someone who watches a lot of movies, this feels kind of shallow, but a fun kind of shallow that embraces itself, which to me puts it as something closer to an exploitation movie, which is by no means bad to movie, because a dumb fun movie that occasionally shows glimpses of something smart going on, is better than a boring, dumb movie constantly trying to prove it is smart.

Outside of its gimmick, there really isn't much else to talk about Hardcore Henry for me, yeah the action is cool, but that much is obvious if you've seen trailers to this. Sharlto Copley turns in a really fun performance as Jimmy (all of them), but beyond him, there are no standouts, the film's villain is fun to watch, but less for the performance and more for the bizarre unexplained powers he has, while Henry's  wife is just that for the most part (there's a twist here, but it doesn't do much for me) so no one comes out bad, just standard. I guess before I end this I should discuss my thoughts on the lack of female characters here, as many others have, which is summed up as just a shrug, I don't feel bothered by it, by its nature, this movie is meant to be like trashy junk, hence my comparison to exploitation, I totally understand the issue with the film business (actually all businesses) being sexist in many areas, but considering this movie is supposed to be dumb fun, I don't think there's much to get worked up about, especially considering that it never does anything really insulting, but I understand if others feel insulted.

If you saw the trailer to this movie and felt like watching it, you'll mist certainly enjoy it, you get what you pay for and a few more crazy fights than you'd expect to the tune of some good songs, but if you lacked any interest, than watching the whole movie won't change your mind. I recommend Hardcore Henry as a fun way to kill time, with the occasional smart idea, but nothing more, which is by no means bad.

Support me on Patreon for more.