I never did review this when it came out in theaters, did I? Well, time to rectify that. By the way, not reading this may kill you someday... Anyhow let's review this movie. 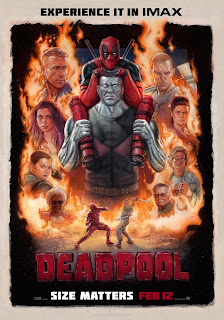 While many consider the superhero genre, a dying one, I'd say we're only just starting to see what it can become, which makes it all the more fascinating to see the oddball films in the genre, like Deadpool. To be perfectly clear, I absolutely love Deadpool, he's a fun dipshit character, so my love for this movie was guaranteed once his costume was revealed, but that the movie actually comes out really good on its own terms is pretty amazing all things considered. As a comedy, this movie is hilarious, as a superhero movie, it's pretty standard, though the approach to the origin is pretty interesting, but the movie really succeeds in being the most romantic superhero movie ever made. Deadpool takes the superhero genre into a rom-com route, and succeeds, I didn't expect to ever say that, but it is true, and it is a huge part of what makes this so unique.

Origin stories, are at this point pretty much played out, yeah some are great, but most superhero movies now try to move past that, or at least make the origin feel more fresh. Deadpool acts like a straightforward origin movie, but it finds a way to freshen it, the origin is told via flashbacks to the main story, which gives us plenty of Deadpool action, while we learn who Deadpool is, strange, yet right for the character. By showing us the origin between bits of the current story, we, learn who Wade Wilson is and why he's doing this, while also making sure we're not just watching someone mark a checklist of superhero origins, we are watching a movie, not a backstory that lacks any new material. In doing the origin as flashbacks to the main film, we are given a love story, where the main story is about reclaiming that love, while the flashbacks help us understand why the relationship matters, this makes the movie feel fresh.

Most of you, at least the readers who see Superhero movies often, may be curious as to why Deadpool's movie is more romantic then the rest of the superhero movies that feature relationships, my main answers to that are simply this, love is the goal here, and the romantic interest is an actual character. Whether it's Thor, Iron Man, or even Spider-Man, the romantic interest, however entertaining they may be, (which varies) are only ever involved for minor reasons, or for specific plot points, for the most part anyway. Deadpool isn't interested in saving the world, he just wants to reunite with his true love, Vanessa, that's his only goal, in fact, nothing he does here even hints at him saving the world, it's all very personal stuff, which makes him all the more relatable, funny how strange that is. While the Raimi Spider-Man films are perhaps the only other superhero films, where the main plot is driven by the main character's love, they still eventually become movies about a superhero whose main goal is to save the world, that's not bad mind you, but it's why I consider this movie to be more romantic than those, well that, and  Mary Jane, Kirsten Dunst, was a lackluster leading lady, and she was the weak link all across. Morena Baccarin is the best leading love interest in a superhero film, since Margot Kidder in Superman the Movie, seeing her and Ryan Reynolds is the kind of perfection, that would've made me love the film, even if it were just a romantic comedy, that is an impressive feat for this genre.

Everyone's praised Reynolds for his performance as Deadpool, which is understandable, he is perfect as the Merc with a mouth, but who would have thought his supporting cast would be great too. Colossus is the best he's ever been while his student, Negasonic Teenage Warhead (seriously) is one of the best X-Men characters to appear in these movies, I'm impressed by that. Even the villains are pretty fun, sure Ajax and Angel Dust are pretty generic action movie bad guys, but the actors and movie give them just enough bits to be memorable, especially once Ajax's real name becomes one of the movie's best running gags. The minor characters get their moments to shine here as well, Deadpool's got his own weird cast of friends, I really hope they all come back for the sequel, I especially love Deadpool's personal taxi driver, Dupinder, the little things really do pay off in this movie.

Superhero movies can be amazing, but the best way to continue that, is to keep finding unique stories to tell and experience. While Deadpool is certainly not the deepest movie around, it's not without it's heart and humor. Everything from the humor and action are well placed, but the movie becomes something better by having an engaging love story push the story. I highly recommend this for everyone, yes even your kids, they'll watch it someday anyways.

Did you like this? Support me on Patreon for more.