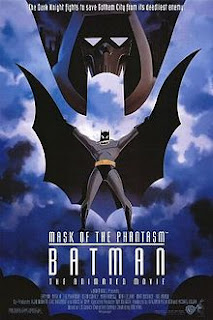 Synopsis- Only Batman can stop the Joker, but when he is being framed for murder thanks to a mysterious new foe known as The Phantasm he'll go deep into his past to unravel the true mystery.

Based on the classic animated series, originally meant for a straight to video release this became a theatrical feature in hopes of huge success, only to become a bomb. The failure that occurred with Batman: Mask Of The Phantasm cancelled future animated theatrical ventures into the DC universe, resulting in straight to video releases. While the movie has since garnered a cult status, it still isn't among the better known releases, often excluded in superhero movie lists.

Batman is played here by Kevin Conroy, who is a perfect match for Gotham's hero, while Joker is at his best thanks to the animators and the wonderful voice provided to him here by Mark Hamill. Andrea Beaumont is one of the best love interests for Bruce Wayne, having a tough yet kind exterior, voiced by Dana Delany, but it's The Phantasm who truly stands out in this film, a vigilante who goes much farther in bringing justice, leading to a more villainous view from others.

This film runs at a short 76 minutes, yet does more with those minutes then any of the other theatrical Batman films could ever do to feel like the comics. None of the movies have ever come as close as being this great, and they might not ever will, well except for one maybe but that's for another day. Batman:Mask of the Phantasm isn't just a great theatrical Batman film, it's the best.