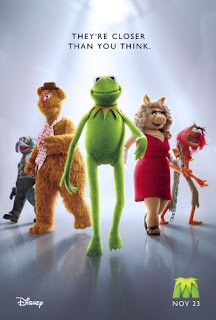 Synopsis- The worlds biggest Muppet fan must help The Muppets save their old stage from a greedy oil baron, all the while reintroducing people to the famed performers.

In a time when so many family films (especially the live action ones) have become boring, annoying, wastes of space comes The Muppets to save the day. As is a staple to the Muppets franchise, this film features musical numbers, some, specifically "Pictures in My Head" and the redone "Rainbow Connection"  will even bring very emotional, tearful , reactions from longtime fans. Of course there are the hilarious ones, "Let's Talk about me" sung by the villainous Tex Richman will have you rolling  the second it appears.

The characters here are all great as they should be, these are the Muppets you grew up watching, just as lovable as ever. New Muppet Walter is funny and charming  but admittedly won't hold a candle to old favorites. Jason Segal plays Walter's brother Gary, with Amy Adams as Mary, Gary's girlfriend, they're fun and are probably the best humans to have ever appeared in any Muppet film,though I would like them to have been downplayed at times, during longer scenes with them it can feel like they're taking the spotlight a bit too much. The cameos are fun to spot as always, though the one that may stand out the most is Jack Black as himself in a hilarious parody of himself. Chris Cooper is great as Tex Richaman and will have you maniacally laughing you'll love him as much as you'll hate him, definitely one of the better Muppet villains.

It's plot is silly and the characters, even more so, but what else would one want from these characters. It's especially appreciated that the actors always take the Muppets at face value, never using a whole "You don't look like an actual creature, person" etc. jab so common in most kids films.

The Muppets are back, they've been missed but it's time to show other family films (mainly the live action ones)  how it's done, this is a must see.