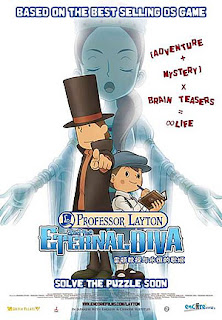 Synopsis- Professor Layton has solved many cases, but when a deadly game with the prize of Eternal Life comes he must solve the case before it's all to late.

Among gamers and film buffs, one thing that is shared is the opinion of  videogame movies being dead on arrival. For whatever reason good stories just can't be made out of them, most seem to find, so when Videogame developer Level-5 made this film based on their characters,my interest was piqued. A company making a film on their own properties isn't unique but it would provide an interesting look at how they understand film structure, for which I'd wager they do because Professor Layton & the Eternal Diva is really good.

The animation here is really cute, not the most amazing, but it's hard to watch without even the slightest smile.Much like the cutscenes within the game, which the look is French inspired, the characters have very unique designs for the most part. It may not be in Studio Ghibli's standards but it is nice to just look at an animated film from Japan that has a style different from the norm over there.

Leading the film is voice actor Christopher Robin Miller (who also voices the character in the game) as Professor Hershel Layton, an avid puzzle solver/Professor from London. Sidekick Luke Triton voiced by Maria Darling (same for the games), is Layton's young "Apprentice number one" as Luke refers to himself as. Emma Tate as Emmy Altava a female assistant for Layton who provides a bit of a competition for Luke, Emma Tate also voices Janice, a famed opera singer who requested Layton to assist her in an odd occurrence.

The film is a really fun adventure with mystery on hand, we get to learn more about the characters within the challenges, as well as just try to think about the puzzles getting thrown their way, which may lead to the film's biggest weakness. At times the puzzles feel a bit much like they originally envisioned this as a game, with little to no reason the solutions are explained stopping the story dead until we know how it was solved. Even the final act of the film itself provides multiple plot twists in a single scene, they aren't bad twists, but maybe a little less explanation would've helped make it more compact. In the end though, the  adventure starts and never slows down, always making it fun to see how far these characters will go to solve the case.