Hugo-Scorsese made a kid's movie? 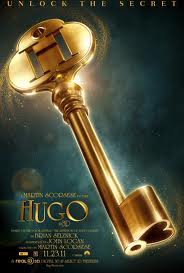 Synopsis- Hugo must uncover a secret left behind by his father that is much bigger than he ever expected.  Danger comes in the form of a train station security guard who will stop at nothing to get him out, but help from a shop owner may just be the key to the mystery of it all.

Hugo features a great cast, Asa Butterfield stars as Hugo Cabaret, speaking only when needed and giving some great reactions to make the audience understand what he's going through without saying it. Ben Kingsley plays as Papa Georges (film buffs may recognize what historical figure he's playing right away) who plays the part so well it'd be a shame if he didn't get more recognition for it. Chloe Grace Moretz plays Georges' granddaughter Isabelle, she provides a great relationship for Hugo, while never actually showing whether or not there is love between the two it still comes off more believable that they are at least a great team. Sacha Baron Cohen rounds out the main cast as the fun antagonist Inspector Gustav, he's charming in the role, as well as makes him a likeable character whom the audience roots for whenever it's shown how human he really is, even if he chases the hero desperately. The rest of the cast are charming in  their roles and some including Christopher Lee, Helen McCrory, and Michael Stuhlbarg will impress the audience even with their short roles.

Most would not expect a director like Martin Scorsese to be the man in charge of a family feature like this one given his filmography, Hugo based on the novel The Invention of Hugo Cabaret (2007) comes as a surprise in this way because it's not the kind of film one would expect from such a legendary director, even more so that it's in 3D. One would expect one of  the most legendary directors to disapprove of this style, but surprisingly  Scorsese brought it to this world and Hugo makes it work. Hugo features a great score provided by Howard Shore, giving it's viewers a sweet, soothing melody that will not only invest them in the scenes as well as make them emotionally attached.  The film's score is so fantastic that it will  leave viewers wanting more as the film continues and ends.

The visual effects are brilliant, the CG here really stands out, along with the stop-motion added into the film, it all is nice to watch and will leave the children as well as the older audiences amazed, filled with wonder. Hugo is visually impressive, definitely one of the more beautiful looking films in years, hopefully it continues to be recognized as such for years to come.  Adults may enjoy it more, but kids will likely still enjoy, as the adventure is really just classic kids entertainment. This will get very gripping leaving viewers wanting Scorsese to return to family films now knowing that he could add that to his list of accomplishments. Hugo is a fantastic film, and quite possibly 2011's best, if you haven't already give it a watch.