The SpongeBob Movie:Sponge Out Of Water-If 3D Nonsense Be Something You Wish 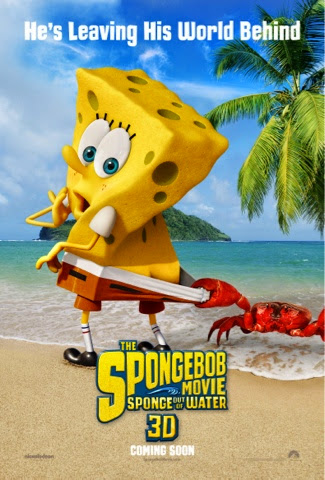 Synopsis-When the secret Krabby Patty formula goes missing, rivals, SpongeBob and Plankton must team up to recover it to save an apocalyptic Bikini Bottom, as well as clear Plankton's name. Along the way, the two will find that the journey is stranger then it seems, taking them across space, time and even our world.

It's not often these days that a 2D animated film gets to be seen in a theater, especially one from a major studio, yet over a decade since his last feature film, SpongeBob decided to stick to his 2D roots. For the most part, this film is surprisingly a hand drawn feature, despite the ads, only the last 15-20 minutes of this adventure is spent on land, featuring the characters in their 3D forms.The SpongeBob Movie:Sponge Out Of Water, wisely chooses to be an ensemble piece, comprising mostly of the shows main stars, making it feel closer to the show. Much like the 3D, the guests for the film are minimal, Antonio Banderas shows up as the films villain, Burger Beard, delivering a fun but cheesy performance, while Matt Berry lends his voice to Bubbles the Dolphin, resulting in one of the films funniest sequences. For the long run, this film centers on the main cast and it actually helps makes the film surpass the predecessor in quality.

While the movement seems less fluid then its 2004 counterpart, the animation definitely got its surreal look better this time, making for a much more interesting look at the world as the town continues going insane. It's actually nice to see a film on the big screen using 2D animation, but of course the film does eventually use other forms of animation, without giving much away, CG isn't the only other animation style used here. The 3D versions of SpongeBob and friends is really nice to watch, the movement and designs perfectly captures their 2D appearances, it really shows how far CG has come since its early days, but it's the superhero forms that break that a bit, they're by no means bad, but the movement starts looking more like the average CG character rather than the 2D style it had done so well with, which is a bit disappointing.

SpongeBob manages to bring more laughs then many recent comedies that come to mind, never slowing down on the insanity, one second the apocalypse has just begun, while a local taco restaurant houses the perfect time machine, yes the film is that insane, but it's all in good nature, as well as just hilarious. References flying past kids heads, while cheesy puns are said casually, all just to get you to smile and it works. Story wise, the plot is probably thinner then its predecessor, but it's all for bigger laughs, and more surreal visuals, that may sound like a drawback, but it actually makes it stronger. While the original film is really good as well there was a sense of restraint in itself, most of the main characters were pushed back for the celebrity voices, which while not bad, made it feel like they didn't want their recurring characters to confuse newcomers much. This time around, if you're a Sandy Cheeks fan, a Mr.Krabs fan, or even a Squidward fan, you get fun scenes centered on them, this movie trusts the strength of the show to just let it play out, newcomer friendly or not, it's not restrained and that really helps by the end.

The SpongeBob Movie:Sponge Out Of Water isn't just a great movie adaptation, it's one of the best comedies in a while. Its reliance to making good jokes and trippy visuals help it succeed, letting go of any restraint that could've hindered such a wonderful film.