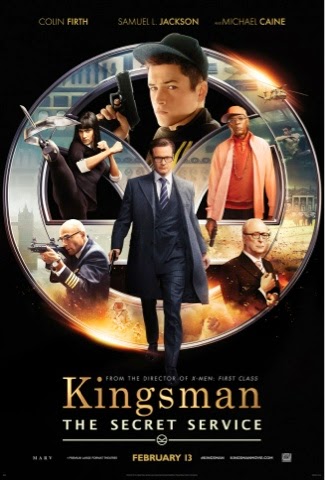 Synopsis-Troubled young adult, Eggsy, is given a chance to become much more when he is recruited to a training program for a secret spy organization, Kingsman, wherein his skill and intelligence well be pushed to his limit. Meanwhile, a famed billionaire, Valentine, has found a supposed solution to global warming, a near extinction of the human race, only as a true Kingsman can Eggsy hope to save the day.

As the movie came to its close, I had no doubts, Kingsman:The Secret Service, is one hell of a fun ride. I'm not sure if this is a proper adaptation of the comic it's based on, nor if it's even a good comic to begin with, but the movie itself succeeds as a homage to the spy genre, tackling the tropes well, while retaining the formula. While Matthew Vaughn has proven himself to be a great director, it's this film that I think will be his most remembered for years to come.

The actors give great performances all throughout, balancing their action chops and comedic chops perfectly. Colin Firth plays Harry Hart, or as the Kingsman know him as, Galahad, who sees potential in the young Eggsy, always playing him with grace, Firth is perfect here, as well as surprisingly fit for an action role, I do hope Firth is willing to take on a few more action roles after seeing him here. Richmond Valentine is an interesting antagonist, out to do what he believes is the greater good, but in the vein of classic spy villains, he's got a device capable of massive amounts of casualties, Samuel L. Jackson provides a speech impediment here that should get annoying, but actually makes Valentine feel more human. All villains need help, Gazelle is that help, played by Sofia Boutella, Gazelle is one badass character, as beautiful as she is deadly, Sofia is great, I'm not sure if she's been in much, but I hope she gets more roles after this; Gazelle is sure to be remembered as one of the years best female characters. A good film needs a good lead, Taron Egerton as Eggsy is that good lead, smart yet crude,  he portrays the role well enough that the idea of sequels following his further adventures sounds like an exciting idea.

Surprisingly, it's hard to think much to feel negative about in the film, even nitpicks are hard, the humor works well, the action is some of the best in a while, especially with the music choices on display. Much controversy may be made over multiple scenes, one involving a parody of a certain church comes to mind, but the film knows what it is, what it wants to be and how it chooses to do it that it's hard not to go in without any sort of enjoyment. Go in with as little information on the film as possible, you will love it, this is a true work of masterpiece for any filmmaker, Matthew Vaughn is treating his audience to something special.