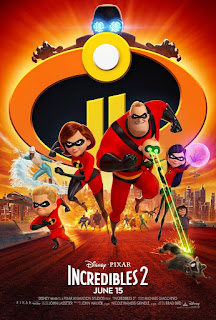 This wasn’t worth the wait.

Whoa, whoa, whoa, whoa, hey, relax, put your pitchforks down, I didn’t say that it was bad, It isn’t, this movie is fine, just a bit shallow once all is said and done. I’ll admit, even though I really enjoy The Incredibles, it’s never been one of my favorites in Pixar’s canon, it’s really good, but middle of the road for me, so it’s not like I was ever really keen on seeing a sequel. My lack of interest in a sequel was not helped by the first film also feeling complete, it has pretty much every superhero trope you’d expect, the superhero ban felt resolved in the end and the family was pretty much happy, where could they go? The answer Incredibles 2 gives us is... nowhere.

Let’s go over the plot before you attack me, it’s fairly simple. Picking up where the last one left off, we find the Parr family fighting a super villain known as the Underminer. After a cool action sequence resulting in a lot of damage, the Parrs are informed that the agency funding their secrecy has ended, thus they are left without a home and since the ban was never lifted, they have little to do. As luck would have it, a fan of superheroes wants to fund a campaign to lift the ban, with Helen being chosen to change public perception on heroes as Elastigirl was the least destructive of the currently living heroes. The choice leaves Bob, Mr.Incredible himself, stuck with being a stay at home dad, leading to some hilarious bits of Bob learning to be there for his kids, learning to adjust to new types of math for Dash, trying to help Violet with relationship troubles, and discovering Jack-Jack’s powers. As all this goes on, a new mysterious foe, the Screenslaver, creates trouble for Helen, making the road to a ban lift that much harder.

I could go on and on about the stuff I found weak in this film, but it all stems from one issue, this is a shallow film that never needed to happen. The focus on the superhero ban feels like a more explicit, redundant element from the first film, which felt unnecessary to revisit, especially because the first film hinted at the government changing their minds about it, but I guess they didn’t. Then there’s Violet’s subplot about trying to get with her crush from the first film, though it’s funny, it ultimately doesn’t feel much different then her shy, arc from the first film. Helen’s job? Not an exact copy of Bob’s island job in the first movie, but it did felt a bit like it, especially as the plot unfolds. Even the main hook of the film, Mr.Incredible becoming “Mr.Mom” feels like a longer version of the first movie’s montage sequence wherein Bob becomes a better dad as the money rolled in. There’s not a whole lot new here, it just feels like it because some retreads are much more explicit and focused on this time.

I didn’t want to come in to tell you I was left feeling shallow, but it happens, some movies just never live up to the hype or wait and this is one of them. As far as Pixar sequels go, this is easily the weakest (I liked Cars 2, okay?) which is probably something none of you wanted to hear, but it’s true. Putting aside the Toy Story sequels, none of Pixar’s sequels have been among their best work, sure, but I feel like they at least all tried something new, or necessary, Cars 2 expands on the franchise by exploring international racing, it was a full-on spy film which gave it something to stand out in Pixar’s line-up; Monster’s University was a college feature with a mature message to pass on to kids, as well as longtime fans; Finding Dory was an emotional feature, that delved more into a character we thought was a joke, providing a touching film representing those with learning disabilities; Even Cars 3 provided a good look into what it’s like to be an aging athlete, while dealing with possible sexism/racism in sports (look I can applaud them for attempting to discuss that alright). This doesn’t really explore much that we hadn’t last time, even the Elastigirl fighting crime, while Mr.Incredible stays home stuff never becomes empowering for women, nor does it really do much to say being a stay at home dad is fine, it’s just a momentary thing. If this had never been made, Pixar wouldn’t have much of an empty spot, there’s nothing new that it explores both as a sequel to the first movie, or just as a movie in Pixar’s stable.

Fortunately there are some good things here, after all I never said this was bad. The action is really cool, rivaling a lot of the animation and effects found in the first film, even if the villain in this outing was weak (with a somewhat interesting motivation) the action was always top notch and visually pleasing. Also great is Michael Giacchino’s score, but then if you’ve heard his work before, especially at Pixar you probably already expected that. If it weren’t the animation and score lending itself well to the humor and action found, this might’ve been a total loss, but the good thing is those elements elevate the whole movie to being worth a watch.

Maybe it’s the near 15 year gap, or that I was right that this franchise never needed to have a sequel, but Incredibles 2 was a disappointing sequel, funny and cool to look at but not much else. Director Brad Bird said he ignored whatever development the superhero movie genre has made since the last one was made, but maybe he should’ve looked at them, quite a few have had meaningful stories told, ones that didn’t feel like three-part pilot episodes given the budget of a major movie. That’s what Incredibles 2 feels like, a multi-part pilot for a TV spin-off, fun, even engaging, but acceptable only as something you could watch for free on TV, not something you’d want to pay a premium theater price for.

P.S. the Pixar short in front of this, Bao, was a much better film.