16 years ago the world was introduce to a sponge, he's a fry cook, a jelly fisher, a horrid driver, a TV star and even a film star, SpongeBob has meant so much to the world that he just got another film recently (reviewed here) which now gives competition to the first film (reviewed here).Both films are fine examples in translating a show to a movie, both feel unique and fresh, but all things considered one is superior to the other. What SpongeBob manages to offer in both films though are two distinct ways a movie can be made out of show. 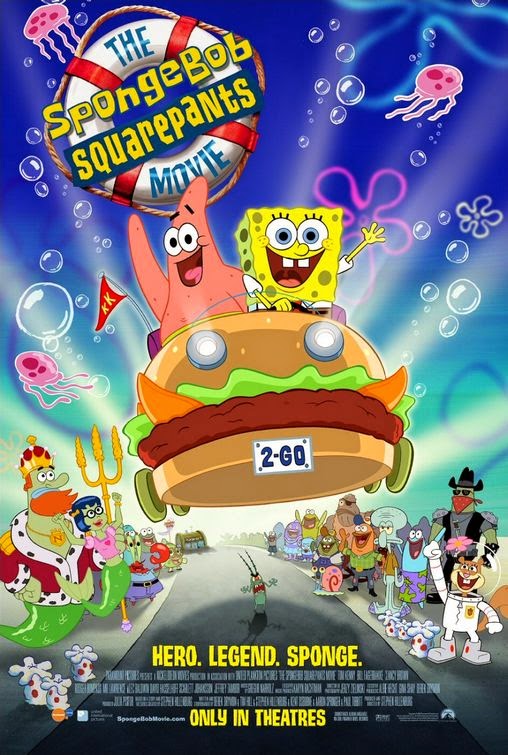 The first movie, simply titled The SpongeBob SquarePants Movie, is a more common route taken by movie adaptations of shows, a sort of big scaled finale of the show it's based on, with SpongeBob yearning for a managerial position at the new Krusty Krab 2, Plankton being much more sadistic then the show has ever presented him, as well as a King Neptune that fans have presumed to be a different character compared to the version on the show. Rather then just make the movie feel like an episode, everything done here seems to want to emulate a more standard Hollywood film, resulting in tone that doesn't feel like an average episode, but an "experience", the film has its bits of oddities but for the most part it feels restrained. Suddenly SpongeBob's child like attitude is an issue to him, characters common throughout the show are given cameo at best appearances just to satisfy fans, making it feel newcomer friendly, but a bit too different from the show. It's not a bad route to take for a film, as mentioned before, this is a fun movie, shows should use this one as an example for transitioning, but it does eliminate the episodic feel that was charming before. A movie adaptation as an ending is fine, but with many shows it just feels forced, or worse if the show continues afterward it will always feel like it now has the ending hanging over it, "does it matter if  this is all before the movie?" SpongeBob avoids this by being non-nonsensical enough that even with the "ending" hanging over its head, the show will probably still be able to do as many random stories due to its own lack of continuity driven stories.As it stands, The SpongeBob SquarePants Movie is one of the better movies to tackle this route, but as with many shows that do this I feel like it goes a bit out of its universe to please non-fans while also making a sort of ending for the show, for no reason other than they couldn't figure out how to make a bigger story that could stand on its own scenario. 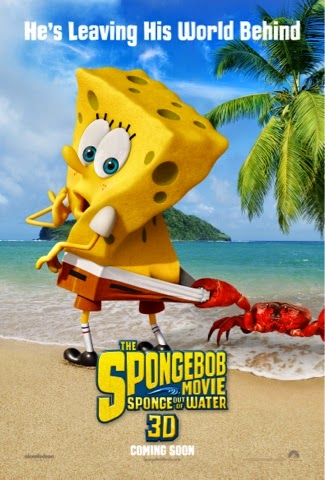 A route less taken for these kinds of adaptations would be The SpongeBob Movie:Sponge Out Of Water route, wherein the movie feels more like an episode then a movie, while also not providing any sort of show ending scenario. It's interesting that  the phrase "it's like a really long episode" is commonly used to insult adaptations of these kind, mostly because movies kind of are really long episodes, and episodes can be considered as short movies. What I'm saying is that realistically, that form of criticism feels like the word "bad" should be between "long" and "episode" because the way I see it playing like an episode can yield some really good results for everyone. This movie feels free of the typical Hollywood "rules" for films, letting it be its own little neat comedic absurdity that fits nicely with the show, everything feels like the usual adventures, the show's recurring cast is utilized, while a bigger story is at play that still retains the SpongeBob feel. No real arcs are given beyond Plankton learning to be cooperative, but even that is not given this "epic show ending journey", it just feels suitable for the tale. While it all might seem strange, the conflict is fit for a movie despite not relying on the characters or settings going through an ending scenario, which really makes me wish we could see that more often, shows shouldn't have to force a movie to be their ending, sometimes it's  nice to just feel like another adventure but on a larger scale. Sponge Out Of Water is a great time because it played to the show's strengths, whether it was pleasing non-fans or not, it's important to acknowledge how creative a team can be when they're not restrained by pleasing newcomers, or even longtime fans, just doing what you know can be great. I really hope future attempts can learn from this approach, as many movies could've been better without "show ending" restraints, or avoiding characters that may confuse newcomers, yet still making tiny references just as fan service.

I still recommend watching both movies, but just be aware that both have very different feels, and yes I prefer the latter over the original.