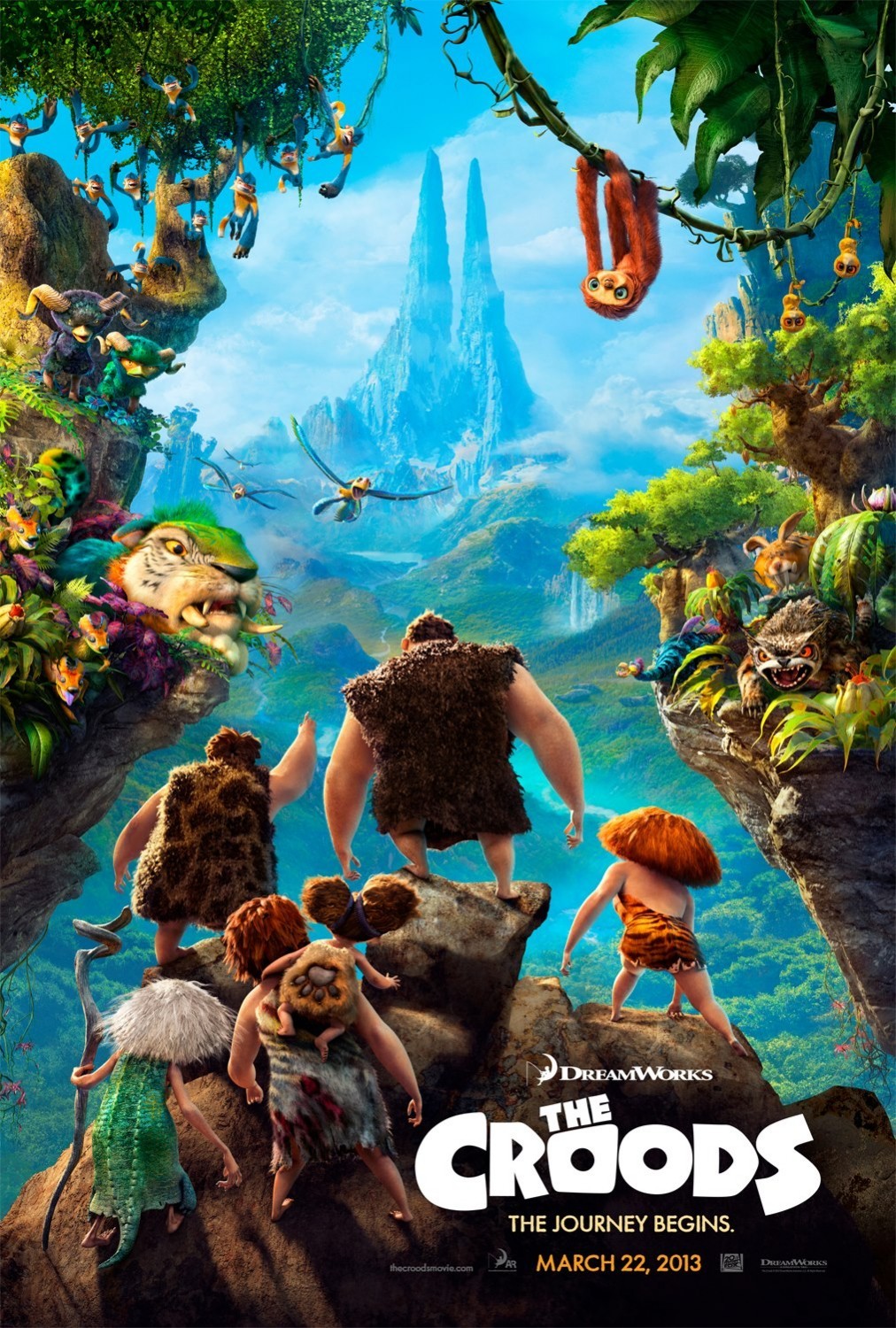 Synopsis-When the world around them is coming to an end, the titular Croods will embark on an adventure to find a new home with the help of the next step of human evolution, a homo sapian known as Guy. Willingly or not, the Croods will have to learn the lessons they were thought to survive may not be so useful in their brave new world.

In recent years, Dreamworks Animation has moved away from using pop culture references as their main source for comedy, their most recent film The Croods continues this, taking it's main source of comedy from classic cartoons by utilizing slapstick more than any previous animated film from the studio. It's spent a long time in development, having  been at one point in Aardman's control, it's a curiosity why Dreamworks even bothered to continue it,despite the long troubled development period, i'm pleased to admit that it's a great movie.

Dreamworks provides some of the best animation it's put out in it's lifetime, the designs of the big landscapes are simply amazing. Creature designs within the film are fun to look at, it's obvious that most of them take a similar art-style that we've seen by director, Chris Sanders, whose  previous films, Lilo & Stitch and How To Train Your Dragon also implemented. It's great to see the filmmakers going wild with the creatures of the world, rather than being held back by sticking to the designs of historical fact, it's a cartoon after all and who knows maybe some of these strange looking creatures did exist (doubtful but its fun to think about). Humans aren't left behind in the design department, the cavemen themselves look bulky and messy, as one would expect in real life, while the more modern homo sapian character, Guy, played by Ryan Reynolds, appears more neat and fit, providing a nice contrast. Most favorable in design though would be its leading female character Eep, played by Emma Stone, unlike most female leads she is not incredibly thin, (though in no way is she ugly despite still having the caveman characteristics) but this never becomes a problem with love interest Guy, making for a very interesting difference with her to almost every other female lead in animation.

This is easily one of the most hilarious Dreamworks Animation films, the use of its quick slapstick humor, with the occasional witty dialogue works great, the cruel world in the film leaves a lot of nice humor that works very will. Aside from comedy, this film still manages to bring a lot of heart, especially towards the third act, which makes for a spoiler heavy weakness, one that feels like they removed a darker end to one of the characters to please families, but the emotion is still there. Regardless of the awkward moment in this otherwise great film, the ending they chose is still satisfying in it's own right, just not as satisfying as it could've been.

The Croods is a great family film, bringing in a lot of comedy and heart to it. Thankfully the filmmakers avoid using cheap pop culture humor that once plagued the company. It's hard to imagine a sequel working for this, but if the studio can keep most of the team for it the sequel may have a good chance.