Rise Of The Guardians-Believe And They Will Protect 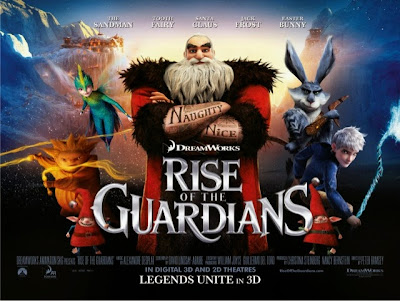 Synopsis-Jack Frost is pulled from the comfort of no responsibilities when a great evil, Pitch Black the Boogeyman, threatens to bring the dark ages to the world once more. The only line of defense are a special group of guardians consisting of members chosen by the Man on the Moon (an unseen Godlike being who creates the mythical beings of the stories) consisting of, Santa Claus, the Sandman, the Tooth Fairy and the Easter Bunny, Jack will need to make a choice, help the guardians or continue his lonely life.

Dreamworks Animation presents it's first holiday centric feature with Rise of the Guardians, an Avengers-esque story focusing on the mythical beings all children have grown up with. Based on William Joyce's ongoing "Guardians of Childhood", the film picks up centuries after the books, introducing the audience to the main guardian of the film, Jack Frost, who is more of a free spirit, than hard working guardian of children. Jack would rather avoid the guardian life style due to centuries of not being believed by the children, therefore not being visible to them as the film showcases, which actually makes him a compelling lead, the audience can instantly sympathize with why he is the way he is. Joyce's choice in making a new character the lead in an adaptation of his own work is a strength here, we learn how the world works as he does, as well as the story can be less predictable even for those who are aware of the books. Adaptations changing material up can be bothersome, but when done right like it is here, opens for interesting new roads a story can take.

The team presented, is a re-imagining to the characters everyone knows, Santa is a Russian with not only elves, but yetis as well, the Sandman, nicknamed Sandy, can conjure anything up with the sand he uses, including his communication with others ; which makes the Sandman the standout from the group; the Tooth Fairy has an army to assist her, while the Easter Bunny is portrayed almost like an Australian action hero, which lends well to his kangaroo-inspired design. While re-imaginings can go wrong easily, the characters' dynamic as a team is what makes this work so well,  it  provides more than enough to carry the film.

Visually, it's fairly obvious that Guillermo Del Toro (the film's executive producer) left his own mark all over the film, it's a beauty to look at, giving the audience the large scope they need for this world. In terms of the technical aspect, Rise Of The Guardians provides some of the best quality seen  in Dreamworks' history as an animation studio, a lot of effort clearly went into this. Quite possibly the best things to stare at in the film are the sand creations, the little detail in the structures are simply amazing, a nice showcase of the evolution in 3D animation.