Raya And The Last Dragon-Trust In Disney 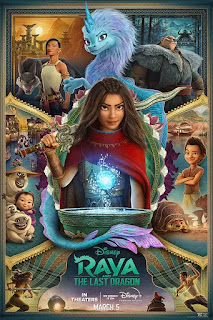 Raya, a princess out to save the world tries uniting a special orb that will stop an evil curse. Along the way she meets a dragon and new acquaintances who she’ll have to learn to trust.

As of late Disney has had a couple of stumbles, Ralph Breaks The Internet and Frozen 2 were both movies that I enjoyed, but were kinda messy. It’s not too much of a surprise, we’re still getting past John Lasseter’s control over Disney Animation, but it did leave me wondering if Jennifer Lee might struggle too much in her new role. Thankfully, Raya And The Last Dragonfeels like a proper step forward, the story is clear, focused and well guided. If Disney was indeed struggling to find a new lead for their movies, it seems that struggle was short lived.

The movie begins with a lengthy flashback to what led the world being in danger, it surprisingly stays on this for the majority of act one. For the entire duration I was reminded of The Lion Kingand Tarzan, Disney features that take their time to establish the world and story, before aging it’s lead up. Much like those, I think Raya benefits from the choice, though unlike those, Rayaactually has it’s lead actress, Kelly Marie Tran, voicing her character from the beginning, which is appreciated. Once that emotional story set up is out of the way, the film continues it’s adventure, introducing the other titled character, Sisu, the last dragon, played by Awkwafina in a way that at first feels like another Genie for the studio, but becomes her own emotional sidekick by the end. What becomes apparent looking back, is that the film is cleverly making sure it’s characters and story are being serviced, we get to know about our leads just as the movie moves them scene to scene. While some might dislike how the journey goes from place to place, introducing characters in each land, rarely letting the story stop to breathe for a few minutes, I think it works because we are still learning about the characters despite the constant moving parts. As Raya and Sisu traverse the various nations of the movie, they pick up people from each nation, a young boat chef named Boun, a con artist baby named Noi and her pets, and a former warrior named Tong, you’d think they’d all suffer from lack of character, but as said before, the constantly moving story still manages to let us learn about them as the story goes. With the team fully assembled, it becomes clear that the movie is about trust, sure, but it also reflects on one of the more common Disney themes, your family is the people you choose to enter your life. That the team is comprised of orphans, people who have lost family members, etc. really hammers it in.

As always Disney shines in the animation, with a lot of focus here being on the action yes, but surprisingly also in water. You would think that Moana focusing on the element would deter them from using water as a focus again so soon, but the movie makes a lot of use out of it as a theme and subject, with the rain looking especially amazing as it takes over whole scenes. Tying nature with trust through the water was a pretty neat idea that works, not just because it’s refreshing to see a Hollywood movie where dragons are tied to something besides fire, but also because it makes the tech important to the story. I love when movies experiment with new technology, but it’s great when that experimentation is important to the film’s story or messages. This movie could not work as well, if the animation couldn’t convince you about the beauty in its world.

In all honesty, the most worrisome thing in the film is when the dialogue is trying too hard to be “hip” for the kids. I personally don’t mind if a movie uses some modern words, after all it’s not like in universe they’d actually be speaking our language, but sometimes it can be a bit much. One of Sisu’s first lines for example is comparing herself to a lazy classmate on a team project, not only is it a bad representation of her character’s persona, but it just feels like she’s explaining it to us lazily, does Raya have group projects in class like we do? A few lines are that clunky, but they don’t do them as much, so it’s easily forgivable. I’ve grown to not be as bothered by modern slang in movies set in the past, so long as it makes sense to what’s going on, sounds natural and isn’t delivered solely because it’s a thing I know. Raya has a few of those kinds of jokes, but again it never overtakes most of the film, so one can easily ignore it.

Where I think the film will struggle more with some audiences is in its familiar tropes. While I disagree that this is like Avatar The Last Airbender, a commonly compared show (similar clothing and influences does not a rip-off make), it is like many fantasies. A nation divided, a quest to unite an item that eventually unites people, rivals on opposite ends coming together for good. It’s not exactly original but then what is? I enjoyed it for the stuff that felt new, but I know it won’t win everyone since at times it is following the template closely . All that considered, it really does feel like new territory for Disney Animation, sure they have done movies that aren’t musicals, but Raya isn’t trying to mock musicals, or even critique the animation studios’ past, it’s much more action focused. Ultimately this is a straightforward action/adventure fantasy film that may not create a lot of new scenarios, but the payoffs are satisfying and refreshing.

Regarding the theme of trust, I at first worried it would be much more basic on the subject, but it ended up being less so. Raya starts off not trusting anyone, her father insists trust is needed, so the lesson is there, but rather than just prove her wrong, the movie does acknowledge Raya was right to not trust so quickly. Sisu adds to this by also being quick to trust others, but like Raya is betrayed for it. While on the surface this may make it seem like the movie is contradicting it’s message, or setting up a lesson of distrust, it’s actually showcasing the limits of trust and the importance of doing so despite past mistakes. While Raya and even Sisu are betrayed, Sisu remains on the side of trust, knowing people can do good if continually showed to do so. This leads to Raya eventually revealing to her team some truths, causing some friction over the lack of trust, it’s not long mind you but it’s clear why it matters. It’s simple enough for kids to get, but far from being basic because it shows both sides of it.

Raya And The Last Dragon is a solid answer to whether or not Disney Animation can still succeed without their previous head. The animation as always is impressive and I’m glad it matters to the theme of the story. The cast is great, there’s a lot of heart and I love that it doesn’t try to be a cynical modern fantasy film, it fully accepts what it is. Definitely a good time to return to the big screens.