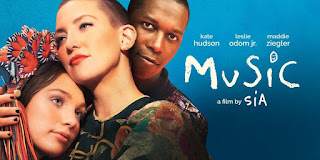 After the death of her grandmother, Zu, must take care of her autistic sister, Music, with the help of her neighbor Ebo, she will learn to get over her addictions, start trying to be a better person, and finally become a mature adult.

It’s barely March, which is already late in the first quarter of the year, sure, but that I already have a strong contender for worst film of the year is not a good thing. Created by musician Sia who I normally like, Music feels like a joke, a cruel, insensitive joke aimed at mocking Hollywood films that pretend to inspire, but exist for awards, the Oscar bait, except it’s not a joke, it sincerely is what I described. I went into this knowing it’d be bad, hoping for a Cats-like mess that I would laugh and enjoy, instead, I am miserable having seen this, and I just feel worse for having sat through it. Music is exactly the film, critics trash routinely, before realizing that whatever issues they have won’t matter when awards season comes, this managed to snag a few Golden Globe nominations, so an Oscar nom wasn’t completely out of the question. Honestly, the idea of it being nominated for positive awards is maddening, sure the music segments have some merit but even those aren’t enough to lift this mess. I hated watching this.

I really shouldn’t be mean, but when you have a movie barely trying to talk about serious subjects, turning them into jokes, why shouldn’t I be mean? The only character in this that gets treated like a human is Kate Hudson’s drug addicted, white girl character Zu, Music is an over exaggerated autistic girl that is just Zu’s excuse to grow up, while Ebo (the neighbor) is at times the overly forgiving lover, at others the magical black guy who can fix the life of the white characters as if that’s his only purpose there. Add to this the other non-white characters are just there to support our white lead, just cause you don’t use negative stereotypes, doesn’t mean you aren’t making insensitive stereotypical characters. Honestly I’m surprised there hasn’t even been much criticism of actor Beto Calvillo’s character in this, Felix Chang, a neighbor of Music, who might have a crush on her, it’s hard to say, but he seems to help her out daily. Felix at first seems like a nice enough character, that he’s Asian and helps Music live doesn’t feel too insensitive, but the movie drops the ball there by introducing his abusive father. I’d put more effort in doing a spoiler warning here if I cared, but the movie is harmful so I won’t; the abusive father is portrayed cartoonishly, almost insensitively, which ultimately results in Felix getting killed. The murder goes with little acknowledgement beyond Felix essentially becoming a guardian spirt for Zu, Music imagines him in musical segments, but she doesn’t seem to notice he’s gone in the real world, at least the movie doesn’t really zero in on this. We had an Asian character, who was kind to our title character and the movie turns him into a symbol for her, leaving him with little character and a bullshit sacrifice... ridiculous.

This movie isn’t just dumb, it’s insensitive and the hope it tries to portray ends up feeling cruel and dismissive to everyone around our lead. It’s not kind to our non-white cast, (I feel sorry for them, Leslie Odom Jr. deserves better than playing Ebo in this) but it’s not kind to the title character either, Music is portrayed as over the top dumb as Ben Stiller’s “Simple Jack” from Tropic Thunder, no, seriously this drama made the mistake that a well-beloved parody already mocked over a decade ago. I know some autistic people, while I am no expert I can tell you this cartoonish portrayal is not only wrong, it only further hurts the public perception on people who already get mistreated so much. It also just hurts that as mentioned before, Music isn’t even a character in her own film, she’s just there to make Zu grow up, her arc is closed by her singing, but the movie wasn’t really setting that up as an issue, ultimately she’s there to serve Zu’s arc like everyone else. Take note screenwriters, if you are planning to make your movie centered on an autistic character, make sure they are a character, not just the reason why another character grows up. Music constantly imagines music video-like dream sequences, which you would imagine is all about her wanting to be a singer, but that’s never explored by her, that is of course until the end, but even that doesn’t feel right because her singing doesn’t ring as a big breakthrough, it’s just a cute thing she does. Music should be a character, not just the autistic girl who ends up being important for the lead to finally find a reason to be an adult.

The only somewhat redeeming quality of the movie is the aforementioned music video sequences. To be clear, I can’t say any of the songs are especially great, some are kinda catchy, but nothing I’d normally listen to. My praise, if you can call it that, for these scenes are largely just acknowledging that they have some nice lighting, the colors pop, some of the dancing is neat, I can ignore the stupid plot for brief moments and it provides a nice idea of what the movie could’ve been. Apparently the reason why an autistic actress wasn’t employed for the film was that their attempt to do so resulted in the autistic actress getting overwhelmed by these scenes, which is just dumb. There was really no way to make the scenes more comfortable for the original actress? Or my proposal, keep Maddie Ziegler in these fantasy sequences, suggesting the autistic girl imagines herself as someone else, only for the resolution being Music realizing she’s perfect as herself, thus her fantasy self becoming herself. Sia could keep her music scenes, while keeping the autistic actress from feeling overwhelmed by having her less involved in them, but in story it’s her character struggling, and eventually accepting her image, so the autistic actress only does a few bits of the intense music scenes, so much better I think. Still what we got is the film’s highlight, a decent enough group of scenes that makes the process of watching this a little easier to deal with.

Ultimately, this isn’t just a boring, unoriginal movie, it’s downright insulting to autistic people, to non-white people, to pretty much any group showcased. I know people have been quick to call Sia a monster for this, maybe she isn’t, but there’s no denying she should’ve listened to other people about what she was doing. Poor Maddie Ziegler is now stuck with yet another famously awful movie (she was in The Book of Henry), and this time she insisted this would be ableist and hurtful to real people on the spectrum. Sia has apparently clung the to this girl, a subject I’m not fully prepared to discuss, so why ignore her words? Perhaps Sia is a cruel monster, I want to believe she’s not, but what can we do besides speculate? Maybe Sia learns from this, maybe not, but I do hope that if any good were to come out of this, it’s that filmmakers get better about their casting seeing the controversy that arose from this. Of course I also hope that they consider writing their diverse cast with characters in mind and not just “inspiring” figures for the white girl to learn from.

This is a nasty, awful film, it tries to be too much and yet it’s got little to positively say about any of it. Sia can say she had good intentions all she wants, but the fact is it comes out wrong and very insensitive. The music segments show hope that she can maybe direct a much better feature someday, so long as she tries to avoid the areas she has no knowledge in, or hopefully listens to the people she’s representing. As much as Music feels like a hateful insult, I sincerely hope it’s not wholly indicative of Sia, not because I need her to be good, who cares about that? It’s just the film does seem to have been made, initially, with good intentions, which of course doesn’t result in a good thing, but at least means it wasn’t intended to be the insult it became. I doubt a worse film comes out in 2021, so I suppose the best thing in Music is that it almost guarantees that I’ll only go up from here... I hope.