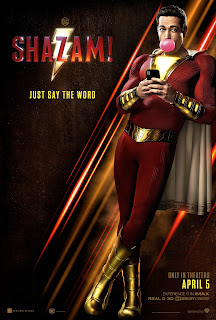 
There’s no beating around the bush about this, the trailers really undersold this movie. I’m sure there’s a lot of you out there who skipped this to save money for Avengers:Endgame, but as I sit here writing about this, I still can’t help but feel the lack of enthusiasm for SHAZAM! is because the marketing was just not great. Don’t get me wrong, I was excited for the first teaser of this movie, but I’ll admit that probably had more to do with me being sold on a lighter DC film than it being a particularly great trailer. The jokes were fine, the presentation of the idea was fine, but after multiple viewings and months without new footage I was worried Warner Bros. was hiding a dud, the second trailer (released barely a month prior to release) did little to help. Having finally seen the movie (twice) I’m happy to report SHAZAM! is DC’s best film since Superman The Movie, which is a shame because the movie is being neglected right now.

It is not my place to tell you how to spend your money, so I won’t tell you to watch this over the latest Marvel feature, but if you’re a superhero fan, or just a fan of classic 80’s family films you owe it to yourself to watch this movie. Admittedly, it’s not like the movie is struggling, it is fairly low budget and it’s doing well, I just think it deserves more love. It’s a charming holiday film (the bulk of the story takes place around Christmas) and compared to recent Marvel films which are tying up epic storylines, SHAZAM! proves to be a nice relief. Not that I hate the epic saga of the MCU, but it’s fun to sit down and watch a kids film be weird, scary and silly without the weight and expectations of other films.

I’ve spent a lot of time talking, but I’ve barely touched on the film’s narrative, let’s change that. So, SHAZAM! DC’s latest feature starring a superhero they bought after suing it for being too “similar” to Superman, here presented in a way that feels more like the man of steel than any of their last two decades of films. Following the overall story of the New 52 take on the character, Billy is altered to be one of many people approached to become the red, cheesy hero, rather than the only choice. Dr.Sivana, a man who was once approached for the power, becomes a threat to the world when he harnesses control of the Seven Deadly Sins of man. What follows is Billy abusing the heroic powers granted to him by the wizard Shazam, while Sivana hunts down the new champion to rule the world. Between the comedy, the horror elements courtesy of director David F. Sandberg and the overall charm of the themes of the film I just loved the movie, it’s a bit too long sure, but it’s a simple and joyful ride.

Asher Angel and Zachery Levi are great playing Billy and his superhero counterpart respectively, always feeling like the same person, despite the age difference. Zachery Levi I especially have to praise, Angel is best regarding the emotional beats (the eventual reveal with the mother is especially sad) but that Levi doesn’t give a performance that makes him look simple as most adults who play kids often do, is a testament to how much effort was put into bringing this character to life. Helping to bring the character to life are of course the wonderful supporting cast, taking cues once more from the New 52, the film places Billy with a loving and diverse foster family, each are adorable and make for a lot of the heart in the film, but it’s Jack Dylan Grazer’s role as Freddy that gets a huge bulk of the film to act opposite of our lead. If there’s one weak link it’s Mark Strong’s Dr.Sivana, don’t get me wrong, he’s fine and I do like what his story is about, seeing the abuse he goes through is tough, but I’d be lying if I didn’t mention I prefer Sivana being a wacky mad scientist, I get why we got the change, comics Sivana would probably feel derivative today, but I love the silliness to him. Overall we do have a great cast, especially when my issues with the weak link are mostly nitpicks, I’m excited to see where we go next, especially since DC seems open to explore their weirder aspects now.

I know most of you are probably getting ready to watch Avengers:Endgame, but surely you can make time to watch this right? The movie isn’t particularly hurting so a matinee is fine, just do yourself a favor and watch a charming little film in between all the spectacle hitting theaters soon. SHAZAM! isn’t the most important viewing of the year, but it may be one of the most heartwarming of the year, it’s certainly the most wonderful DC movie in decades.