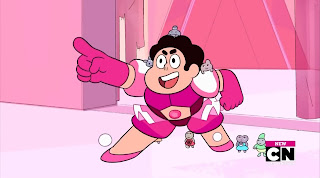 The long wait is over, Steven has returned and I’m... disappointed.
Look, it really doesn’t have to be this way, it honestly could be better, but Steven Universe is a show that is content with the bare minimum. I’m not trying to be mean, or unfair, or “cool”, I’m just stating my feelings towards the show, it has potential to be great, but it squanders it more than it delivers. This latest episode (Familiar) is a reminder of just that, interesting ideas are brought up, but sadly it’s undercut by some odd choices.

Picking up where we last left off, Steven is back in Homeworld, having just finished a conversation with the creepy White Diamond, Steven meets up with Pearl. The reunion is cut brief by an invite from Yellow, followed by one with Blue. As all this goes on Steven asks how he can convince White Diamond to help him, but the other Diamonds pay him no attention. Everything culminates to the song the episode is titled after, resulting in Steven’s next plan of action.

On paper the idea of the episode isn’t so bad, it actually is a logical way to go from where we left off, the problem is that it does nothing else besides offer some questionable messages. I get the show loves to forgive the bad guys, it is important that kids learn to forgive, but at what point do they stop? The Diamonds are dictators, those are the words of the show, of our lead no less, yet he’s trying to change them? Sure, they can be changed, but the fact is the show doesn’t treat their crimes in a way that merits forgiveness. Before Pink was “killed” the Diamonds were dictators, they aren’t complex beings, adding guilt/sadness to them, along with some friendliness now that they see Pink is technically alive doesn’t change that they murder civilizations for their gain. That Steven, as well as the show, paints them in a light of misunderstanding, where they can change just feels wrong.

My only hope regarding the approach to the Diamonds that we now see, is that eventually it’s revealed to be a ruse. I’ve often felt the show needs Steven to eventually run into a problem that he can’t solve with peace or friendship, while yes peace is always a preferable option, the fact is that sometimes it won’t work. The world is beautiful but cruel, while it’s easy to stand above the heroes of the past to say they were wrong for resorting to violent solutions, it’s hard to always succeed with only peace, impossible even. I feel that this show, along with others that preach similar ideals, ignore the maturity of the violent solution, sure it’s not always necessary, in fact it rarely is, but it is necessary when an evil is too great, when those perpetrating evil acts are too far gone that a peaceful solution isn’t enough. I doubt the show will acknowledge that, instead showing that Steven’s methods will work on the Diamonds, but I can hope that isn’t the case.

Going into the episode itself though, it still doesn’t work, even ignoring it’s potentially harmful messaging. Nothing really noteworthy happens in this episode, when we do get the song that establishes Steven’s lesson, the result is a pretty boring song that is less of an ending for an episode and more like the start of the story taking off. Once again, the show ends an episode on a note that makes it feel like an incomplete half, sure the next episode will continue this story, but at least try to make this episode feel like a complete story. I honestly felt they expected Steven’s new wardrobe (a Pink inspired suit) to be enough, especially since it’s “progressive” in that Steven doesn’t mind dressing like a woman, but it feels like the start of the main plot of the episode, not like a way to close the episode. It’s not just the approach to evil people that feels wrong, it’s the choice of what the episode devotes it’s time on, regardless of structure that makes sense.

In the end, I don’t hate this show, but if there’s a reason I don’t love it, despite enjoying various aspects is that we get episodes like this. An episode that try’s to and barely moves the plot, while promoting some odd choices for messages to the kids watching. Hopefully this season closes strong.