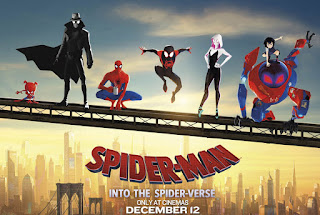 Thank you Stan Lee and Steve Ditko, may you rest in peace.

If there’s any superhero demanding yet another take on film, it probably wasn’t Spider-Man, we’ve had at least three takes within the past decade, why one more? That must’ve been the main question hanging over the filmmakers. Even our beloved MCU faced that question, their response was decent, but it seems that a better response was coming just a year after. While Spider-Man 2 wasn’t the last good Spider-man movie, it was the last great one, thankfully we finally have another, Spider-Man: Into the Spider-Verse feels like a miracle, the kind of movie that would’ve been cancelled, or even toned down for it’s ambition. Whether it’s the use of so many different “Spider-Men” or the stunning animation, this feels so original, bold and risky like no animated film has felt in a while, as well as some superhero films. Certainly the filmmakers found a reason for one more take on our beloved web-crawler.

Our story for this film follows not another Peter Parker, but Miles Morales- yes, it’s an origin story, a film about passing the torch (Parker still finds his way to the story of course) and yet another tale of tragedy following a teenager. What makes it fresh isn’t that they swapped the lead, nor that it’s now a person of color (though yes whether you’re black or Latinx, you’re gonna love seeing our Afro-Latino hero) but in the way our story is told. Miles has a loving family, he’s popular and is not in need of changing his life; whereas Peter needed that bite to become a better person, Miles needs the spider to bite him to find direction in life, similar sure, but it adds a fresh perspective to this tale.

As the title hints, we do get to see more than just Miles be a hero, we see heroes from all kinds of different universes. Our most prominent “Spider-Men” outside Miles are of course Peter (here portrayed as a loser going through mid-life crisis) and Gwen as Spider-Woman (or as you’d be familiar with, Spider-Gwen), a cool female character bound to be a huge hit with audiences. We also get a trio of other versions, Spider-Man Noir,  a Japanese high schooler who pilots a Spider-Mech named Peni Parker, and Peter Porker, the Spider-Ham. The latter half of the team each bring a unique style with them, a classic black and white look, an anime style, as well as a 1940’s Looney Tunes vibe, each are fun and just showcase how much effort was poured into making this look visually amazing. What’s most impressive about this team is how the film always makes sure to make them feel like a team, even a family. While Miles and Peter do argue (they are the core dynamic after all), at no point did I ever feel like the movie was having them fight just because. There’s no constant arguments or bickering between the team, they all care for each other knowing they’ve all been through similar troubles, even when Miles is revealed to be new to the job, the team doesn’t insult him, so much as acknowledge that he probably should stay out of trouble if he’s not ready. It’s in the emotional core of the team that the movie shines, sure it’s pretty, which adds to the substance, but the style would be nothing if this didn’t connect.

On the villain side of things, I’m amazed that such a packed movie still had time to create such compelling foes. Yes, foes, not just one, while Kingpin may be our lead villain in this story, we also get some other foes like Green Goblin,Tombstone, Scorpion, Doc Ock and the Prowler. Doc Ock actually manages to feel unique this time out, largely thanks to Kathryn Hahn giving a wonderful performance (by the way, I should go in depth about how great the cast is, but I’ll spare you some time cause I could go on and on in that front). I’d go more into what makes Kingpin great in this version, as well as the Prowler, but that’d constitute as spoilers, so I’ll just say once we figure out their stories it’s so emotional. If there’s a very minor nitpick I have, it’s that part of me wishes they had asked Vincent D’Onofrio to play as Kingpin here, not that Liev Schreiber is bad, he’s great, I just wonder how Vincent (who plays the role for Netflix’s Daredevil) would’ve done it.

This is one of those movies I could gush about for hours on end, the animation is great, the story is compelling, the cast is amazing and the music being used is impressive. It’s not that the movie responded to the question of why one more take was needed, but that it knew it needed to exist regardless of any question. More than any prior film adaptation of Spider-Man, this movie gets that the original appeal was that anyone could don the mask, that’s the point, Peter wasn’t destined to be great, but he became great when power was thrust upon him, becoming the hero of the people. Yes, Into the Spider-Verse is the first great Spider-Man movie since 2004, but it may just be the best movie about the character. Spectacular, Amazing, the Ultimate take, you name it, this feels complete and a new high mark for it’s genre and medium.

P.S. Yes there’s a touching Stan Lee cameo and the film has a touching appreciation of both Stan Lee and Steve Ditko, both incredible artists who we lost this past year, may they rest peacefully.

P.P.S. Stay after the credits of course.