TEEN TITANS GO:GET OVER YOUR HATE 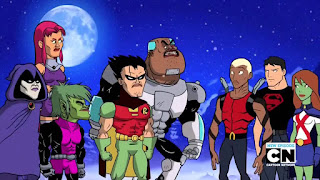 No seriously, it’s time to let it go.


Let me make one thing clear, I don’t care if you hate this show, that really isn’t the point of this, the point is that after so many years, can we move on? I feel like any mention of Teen Titans Go automatically brings out someone who just HAS to share that it’s a weak counterpart to the original, or that it’s everything wrong with Cartoon Network, or that it’s the absolute worst thing in animation history and... At a certain point aren’t you all just tired of this? I mean the first thing is kinda fine I guess, I disagree, but I get if that’s how you feel, but really the worst? It’s a silly cartoon that’s meant to be silly, that it gets called the worst of anything is just ridiculous. Again I’m not here to tell you that you should like this, I’m here to say that maybe it’s time you re-evaluate your feelings regarding what’s at worst an absurd cartoon that leans heavily on one’s knowledge of pop culture.

So, full disclosure, I honestly love this show, yeah it’s no favorite of mine, but it’s silly and self-deprecating humor is hilarious. While it is heavy on referencing random tidbits of DC history, I don’t mind because I have a good grasp on that aspect, plus I feel the show often does it well enough where non-fans can at least laugh with some of the silliness. If I’m entirely honest, I actually enjoy this more than the original show, which puts a good chance of someone killing me for admitting that, but it’s true. I’m not saying the original Teen Titans cartoon was bad mind you, but whereas that show had a few good arcs, it never really rose above some of the other DC cartoons that were around at the time. Personally, the original show at some good drama, some interesting action, the occasional funny episode, but if it weren’t for it’s anime style I’m not sure it would stand out much today. Say what you want about Teen Titans Go, but the show definitely stands out, it’s like the Justice Friends if those shorts featured actual comic book characters making the satire much more scathing. Hate the show all you want, but the show mocking serious adaptations, various absurd comic book facts, the characters themselves and even the reactions it’s garnered earns my applause.

Why is it hated though? Going beyond the obvious “people just don’t like it” reveals the outrage and again, maybe it’s time to get over it. One of the most common responses I hear when people bring up their hatred revolves around the show constantly being on Cartoon Network. Truth be told, I find the “constant re-runs” excuse to hate the show to be the silliest. As a kid I could understand this sentiment, as there just wasn’t much to watch as a kid, now as an adult, with the advancement of technology, do people not know they can stream various apps if they don’t want re-runs of this show? Like you can literally discover shows you might’ve missed while Cartoon Network runs daily Teen Titans Go marathons. Fine, you don’t like seeing Cartoon Network re-run it so much, just don’t watch it, ever considered they re-run it because a lot of people choose to watch the show? Besides, don’t blame the show, blame the channel, how this exists as a mark against the show is beyond me, does a show’s quality drop because a channel chooses to re-run it for ratings? I think not.

The other major reason I’ve seen the show get hate revolves around it supposedly being the reason other shows got cancelled. Early on it was Young Justice and Green Lantern The Animated Series, both shows which were cancelled for different reasons (the former due to not catching on during it’s original run, the latter due to the movie’s performance) and beyond that you can’t blame those shows not catching on the same way this did because of this show, it just happens. In more recent years though, people seem convinced that Cartoon Network cancelled the original show for this, which is absurd as this show began production YEARS after the previous incarnation. Some have even gone on to demand Cartoon Network release a six season of the previous show, despite that show tying up in a good way. I get where people are coming from mind you, they loved the original Teen Titans cartoon, so of course they want more, but to act like it needed another season is a bit ridiculous, the show tied itself up pretty well and the finale was even about moving on from change, maybe the fans need to think about that as well.

As I said right from the start, no one has to like this show, that honestly isn’t my point here. My point is that this show has garnered way more hate than it deserves for being a silly, sometimes satirical, sometimes absurd take on DC characters that weren’t even portrayed the most accurately in their previous animated outing. Kids seem to love it, they’re the target audience, let them have their fun, you had yours with an anime inspired take that bothered some older fans, it’s not that big of a deal. It’s not like they disrespected the material with an absurdly gritty take that considers itself so serious that it ends up insulting Batman, now that just sounds unpleasant and catering to the worst areas of the fandom, glad no one did that.

P.S. As of this writing Teen Titans Go!To The Movies is at 100 percent on Rotten Tomatoes, that honestly means nothing, but I love taunting haters with that knowledge.