So, the Oscars are here, well, I can make my own awards... Granted I've got nothing to give but positive comments, but it's the thought that counts right? Well anyway, here's the BEST OF 2015, let's run down the list! 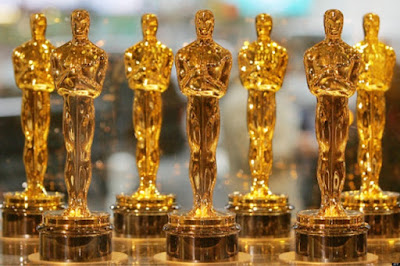 I really, didn't want to just give this movie the honor, mainly because it felt obvious, but yeah it really is that good. The practical effects being on full display was a treat to watch, while just impressive to see, Abrams and crew did not hold back on it. Admittedly, the motion capture characters feel out of place, but too much of it was just too beautiful, so yes, The Force Awakens deserves this honor.

I really loved the score in this movie, sure I knew I would have, the second he was announced for this, but as I sat there, looking at the screen, hearing it all play out, I knew I found the best score for the year. Ennio is a legend in the world of film, with this being his return to Westerns, Ennio went up and proved to us why he deserves to be regarded as a legend.

I'll be the first to admit that I didn't really like this movie, but the costumes were awesome. It wouldn't surprise me if a majority of the effort went to the costumes and make-up, and I wish some of that had gone into making the movie more than okay, regardless of that, I am glad to have seen this just for the work here.

Going into this, I was expecting Crimson Peak would be my winner, but as I thought about this, yes, The Hateful Eight was just more beautiful. Despite the small location we stay in for most of the film, the crew really took advantage of every scene, the landscapes early on are impressive, while every frame in Minnie's Haberdashery looks great. Visually this was an incredible to treat to look at.

Ultron is the main reason you watch this movie, that much is obvious, but Spader was just hypnotic in this role. I honestly can do a compilation of the film's best scenes, and trust me, a majority of them would be anytime Ultron speaks, because as it turns out, you can make human extinction sound like a good idea, so long as James is the one making the suggestion.

Inside Out, Phyllis Smith

Well this was a harder list to make, and sadly, it's because there wasn't much competition to choose from, sad isn't it? But at the very least I can talk about a great performance, Sadness is one of Pixar's best, and that's largely thanks to Phyllis Smith, whose voice perfectly captures the mood of the character. I wish there was a stronger line-up to chose from, but at least the winner is someone who probably would've won even if there was more to choose from.

A dialogue heavy movie wins? Sure, something more visual would be nice, considering a strong script featuring little to no dialogue is an amazing feat, but I find that a dialogue heavy script, where the dialogue never feels like it's "too much" is just as impressive. The Hateful Eight, also succeeds by miraculously making a cast of the most unlikable, nastiest and downright horrible people in a recent film, come off very likable, that's not as easy as you'd think. Anytime a speech, or conversation came along, I was impressed by how much I wanted to hear it all, regardless of the length, which isn't common, given that longer dialogue, often means a higher chance of it all being the product of someone who doesn't quite understand how to end a conversation, before it begins to drag.

-The Peanuts Movie
-The SpongeBob Movie:Sponge Out of Water
-Shaun the Sheep Movie

This was not a strong year for animation, that's not to say there were plenty awful ones (I only saw one that I disliked), but counting the ones I thought were great, there sadly was only three options (including the winner) which is a shame considering one of those wasn't the second Pixar film in the year. Inside Out was a pleasure to watch and it's one of the few films this year with a message that felt unique and uplifting even while depressing, this was the movie that left the biggest impact in animation this year.

I really didn't want to give this one to Rocky, himself, sure his performance was great, but it's a role he's played for decades, of course it'd be great, but as I sat there and watched Creed, yeah, Stallone earns the honor. I can't think of a previous time where an actor made their role feel as fresh as this, Stallone really does feel like he's not only playing this role for the first time, but kicking ass in it as he does.

Okay, so here's the other reason why Crimson Peak was worth a watch, Jessica Chastain is insane in this. Though the twist involving her character was no surprise, I couldn't help but be amazed by how much I enjoyed seeing her continually going fully insane in her role. I still find the movie to be average, but Jessica makes it a memorable kind of average.

The Hateful Eight, Samuel L. Jackson
Jackson is really good a lot of the time, sure he's usually playing similar roles, but his charm just works, and here we get to see him in a role we root for, even if he's not exactly the kind of guy we'd root for in normal circumstances. Seeing an actor play a straight up  asshole is nothing new, but seeing said actor stay enjoyable is not as common, case in point, most unlikable horror teens make you wish they'd be killed off quick for the sake of getting them off-screen, Jackson makes you wish he stays alive, despite how horrid he ends up being as a person.

If you had asked me earlier in the year, I would've had a very different choice, but the more time I took on considering this, the more I just could not disagree with my pick. Leigh is fascinatingly evil in this role, and rarely showing any desperation in her position, Leigh proved she was a force to be reckoned with in the film. There are plenty of reasons to watch The Hateful Eight, and amongst the top is watching one of the best female performances in recent memory.

I know what you're thinking, "a superhero movie?" Yes, stop acting like superhero movies don't deserve any respect, some have been great, can you please stop being a condescending, grown child about it. So why Ant-Man? Surely there were better directors this year? Well, how many directors had the challenge of salvaging a broken project within a year, while also making their film feel unique in the past year? Reed stepped up and made the movie feel like his own, despite having a limited time to do so, that's no easy feat, and for me, he deserves an award for that.

Is it any surprise that this is my pick? I hope not, The Hateful Eight did so much right and more, in a year with some really strong films, this was the one that felt the most impressive. Despite being rooted in the past, the topics displayed, as well as the approach to the characters just feels incredibly relevant to our world. Perhaps the biggest strength to the film, is just how well it all manages to work despite the entire cast being "monsters" in their roles, this is a film about assholes, that still manages to find a positive morality to it, while still suggesting these characters to be worthy of nothing positive in life, that seemed like a near impossible feat until I saw this. Plus the dialogue and violence are just that fun, I promise.

And that about wraps this up. Be sure to be on a lookout for my top ten best and worst movies of 2015 coming soon, and until then feel free to comment here.