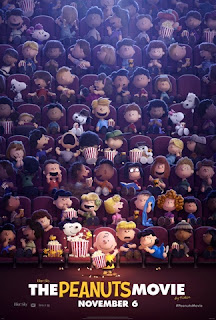 Synopsis-Charlie Brown finds himself smitten with his new neighbor, (the Little Red-Haired Girl) leading him to embark on a quest to win her affection by proving he's a winner. Meanwhile, Snoopy, Brown's loyal dog, goes on his own quest when his rival (the Red Baron) causes trouble for him.

65 years later and these characters haven't changed, that to me is amazing enough, most characters would have been ruined by a modern adaptation, but The Peanuts Movie gets it. I'll admit I was sold on this movie the second the teaser hit, but still worried my first impression might've been wrong given the studio's track record, thankfully if you felt that the teaser did justice to the franchise, you were right, this is a heartwarming tribute to our beloved friends. This movie feels so pure and innocent, that it's hard to imagine anyone hating this, disliking it sure, but hating it? I just can't see it.

This film may not offer much new or innovative choices beyond the animation style, but the strength lies in just that, holding on to what made it special and presenting that to new audiences, while also showing older audience members that the spirit of the classics live on, despite many classics often returning as something completely different. The closest thing I can compare this to in essence is 2011's Winnie The Pooh, another adaptation that stuck to its roots to give the nostalgic the warmest feeling they could get, while also converting their youngest into new fans. While the choice to stay true to the source may seem a bit stale in theory, (especially since it almost feels like a greatest hits album for the franchise) I honestly don't find it bothersome, it's done lovingly and feels natural for the plot; changing it up would have probably hindered it more than helped. The only other issue with it's approach is that it may not make for a success, I'm sure that most kids (especially the youngest) will adore this, but given how many animated films are sold through spectacle, I imagine the same fate that befell 2011's Winnie The Pooh as a possibility; hopefully the 3D look and marketing are strong enough reasons to keep enough kids interested to watch this.

There really isn't much to say about the story, but that remains one of the strong suits in The Peanuts Movie, a simple, episodic tale feels appropriate for a movie that wants you to get in the mood of a child. Children are random, one second they'll focus on a certain subject as if that's their only reason for being, while the next they're off messing around elsewhere, which is how the movie makes me feel; Charlie is attempting various tasks just to be a "winner", and none of it really connects beyond the central idea that he's doing these things to win the love of the Little Red-Haired Girl. The closest thing to spectacle here comes from the B-plot, which mirrors Charlie Brown's quest in an old-school WWI style, with Snoopy, fighting the always mysterious Red Baron, it's cute, fun scene-stealing stuff that does its job, but I imagine kids will love it more than the main plot, until they come back to this film in adulthood where they'll relate more to Charlie's struggles. Simply put, this is a touching look at our childhoods, even if we might've been more hi-tech, the core of the story (or stories) presented here are reminiscent of what being a child felt like, that timeless feel is why I don't expect anyone to be bothered by the use of a typewriter in the film, the heart of it is timeless.

As simple as this all is, you can tell how hard it must've been on everyone involved, the voices are perfect, the details to make this look simple are amazing, and the overall innocence of the story mesh so well in a time where a higher-up could've easily said no to any one of those things. Charlie Brown's goal could've easily come off more sexist without that innocence, Snoopy could've easily become Brian Griffin in personality,  the execs refrained from lesbian jokes at the expense of Marcie and Peppermint Patty, not once does Pig-Pen admit that some of his dirt is crap, this is the innocent, honest adaptation we've asked for quite some time for Hollywood to provide in a nostalgic property, I am thankful we got it. The Peanuts Movie is one of the best animated films this year, it may be old-school, but old-school just feels refreshing now amidst the familiarity most modern films have created. I highly recommend this for all ages, though I imagine, it'll be the youngest kids, as well as the adults taking them to watch it, who will get the most out of it, this is one of the best adaptations in recent years.


Additional Notes
*Not a big emotional gut-punch, but it wouldn't surprise me if some fans cry as it ends, it's that touching.
*Kristen Chenoweth is the only celebrity voice, not sure why, but it's not bothersome so I won't complain.
*Some pop songs play throughout, but they're far and few between and aren't bothersome.
*Support my Patreon, and/or share this post!