*Note: Due to a busy schedule, this week's original post has been delayed, instead,  here's my extremely late review of Daredevil season one, enjoy. 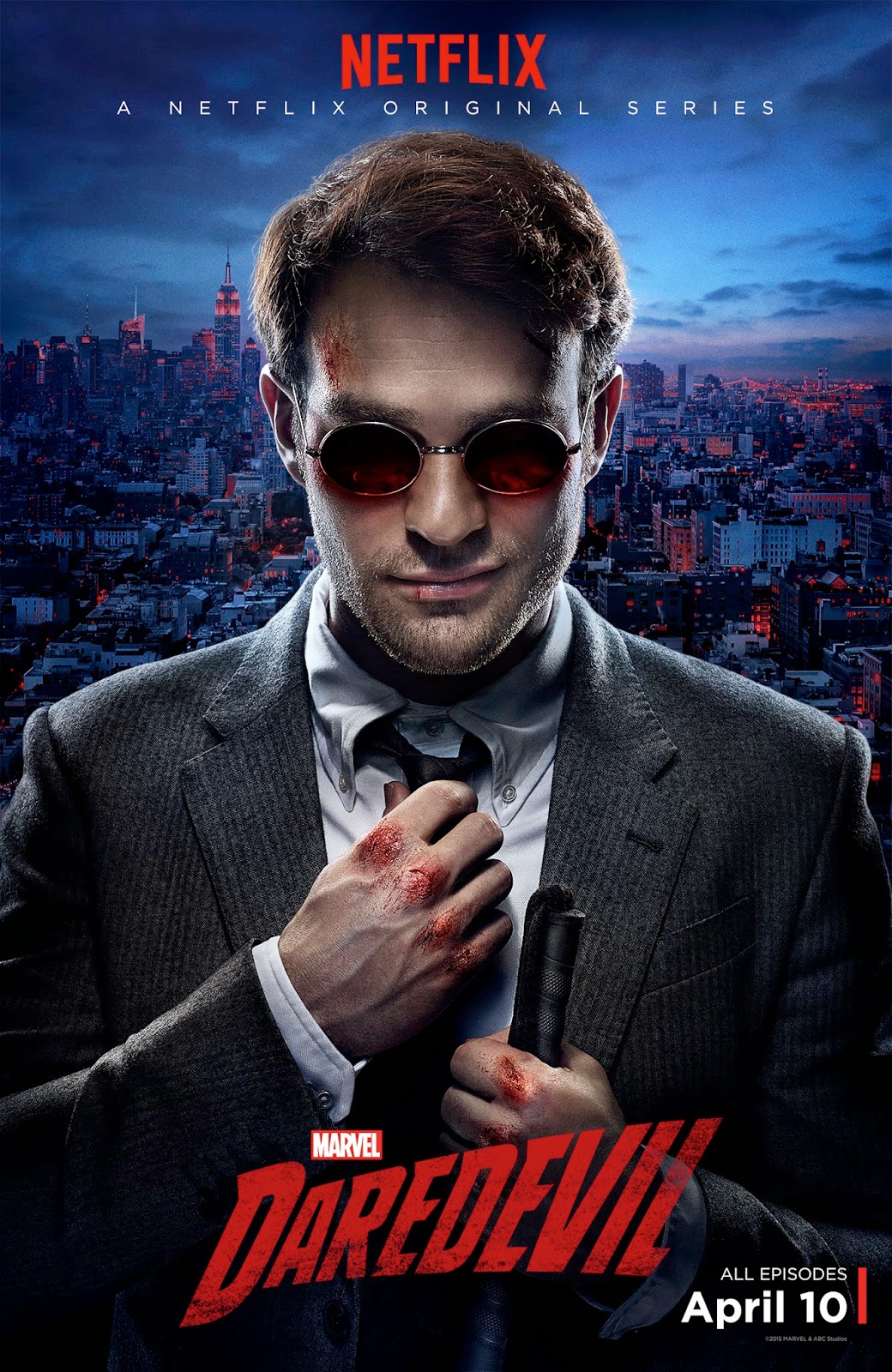 Premise-Witness the origin of Daredevil, a vigilante out to improve Hell's Kitchen, despite his own issues with his job, his friends and most importantly, his lack of vision.


While a more grounded, realistic show from the MCU sounded like a possible failure, Daredevil managed to become the best series to date from Marvel, MCU or not. At this point it's become really easy to shrug off Marvel's TV department, Agents of S.H.I.E.L.D. never took off the way many expected it to, while Agent Carter was a good, but unnecessary show; it isn't that both shows have little impact to the movies they share a universe with, rather that the connection feels meaningless, despite "AoS" trying to showcase its connection the movies, none of it ever plays an important part outside the show, "Carter" on the other hand is just the further adventures of Peggy, nice, but not amazing enough to keep viewers engaged for the long-run, especially when none of it will play as a big deal outside the show. Daredevil manages to surpass the prior shows from the MCU for one reason, it strays from the movies enough to have its own conflicts, unlike "AoS", this show has issues that are small enough to not involve many heroes, but large enough to carry a lot of weight to their world, adding to that, while "AoS" often has to be supplementary to the movies, this show has no connection to them beyond being a part of the same universe, that may not sound like much, but that freedom allows it to be its own creature, while expanding what we know about the MCU,  something that both of the prior shows have failed to do. The greatest achievement the show displays, is how much Daredevil manages to still feel like an MCU product despite it being the universe's "gritty corner", sure the realism that's added can feel a bit odd at first, but the heart and humor feels perfectly in line with the movies we've seen, showcasing why Marvel is currently the best at building a universe on film.

The most reoccurring opinion held for this show is that Vincent D'Onofrio as the Kingpin is a phenomenal performance, an opinion I can't disagree with because, holy crap he is AMAZING! By far, the MCU has had its fair share of fun villains, but Vincent as Wilson Fisk is the best, yes even better than Loki. It might seem strange to praise the villain before praising the hero, but the performance is really that good, Charlie Cox as Daredevil/Matt Murdock is also really good, but to me, Vincent is a big reason why this show succeeds, he is one of the most entertaining villains to watch in any superhero adaptation to date, I just loved watching him steal every scene. Despite my praise mainly going to one actor, I stress that everyone here brings in their A-game, with Elden Henson as Foggy (Matt's best friend) being my distant second favorite performance on the show, he's goofy at the right moments, while carrying the emotional scenes as the season comes to an end perfectly. While I still find the scenes with Vincent as Fisk to be the most memorable, everyone here managed to have their own great moments, even Deborah Ann Woll (Karen), who early on came off as someone whose only purpose was to be the love interest to one of our heroes, but thankfully is allowed to be more than just that especially as the season reaches its climax. Daredevil may be the star, but in the end, it was the Kingpin who kept me hooked, not Matt or his friends, I have no complaints over that because the cast was great, he just happened to be the best.

One of my biggest praises for this show has to go to the action, while they may not be as big as the fights you'll find in the movies, the choreography of the fight scenes were executed amazingly. I loved seeing Daredevil fight, even if his costume was pretty lame all throughout, there's no denying that the action was well done, in fact part of the reason I don't complain much about the suit, is that I honestly feel that the fights are good enough to almost make one forget about that. I know most of you love the final fight from the second episode the most, but for me, the best fight is the final one between Matt and Fisk, just seeing the two different fighting styles, as well as the build up for it, just made it feel that much more amazing to me. I don't feel that these fights are just "good for a TV show", I feel that they're amongst Marvel's best, MCU or not.

The biggest weakness this show has, does lie in the story, which isn't bad, in fact the overarching story is really good, but you can tell there were some issues in making it a full 13 episode season. At times the Foggy and Karen sub-plots felt unnecessary (despite how good they were) to the main story, the seventh episode (Stick) was foreshadowing things that just don't matter at all right now, making it feel a bit useless despite being a really good episode otherwise, and the "work in progress" costume storyline just felt like a missed opportunity. I know criticism of things we like is always bothersome for some people out there, but I think it's healthy to acknowledge the flaws of what we like, and as much as I loved Daredevil, even I can't deny the wait for the costume was too long, both from a story standpoint and a viewers standpoint; it'd be one thing if the costume changed multiple times, to really hammer in that work in progress point (while also giving references to different variations of his costume), but the show just keeps the black suit with a reference every so often of it being a "work in progress", I think they could have handled that much better. Despite the story not being as sharp as it could've been, I think it works overall, in fact it's still a solid story, just not as solid as everything else.

I loved this show, Daredevil didn't just capture my interest, it convinced me to hold on to my Netflix account to watch the show again and again. While there are some issues along the way, I find most of it to be an incredibly solid show, definitely a game changer for Marvel and a great addition to the MCU. I loved this show so much that I have a lot of confidence in seeing what else Marvel puts on Netflix, in fact I'm looking forward to seeing Daredevil on the big screen someday, watch this show if you haven't, trust me it's worth it, you won't embarrass yourself in front of your date...

Additional Notes
*I'm fine with the final suit, though I'll admit to loving the Ben Affleck suit more.
*Sorry about the delay for this week's real post.
*I hope Jessica Jones is just as good, I'll find out this week.
*Support this site, share my posts, and/or my Patreon.
*Like my Facebook Page and follow me on Twitter for more.