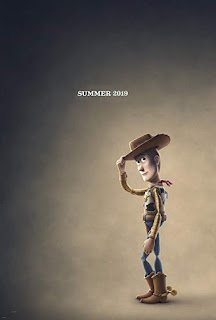 
Upfront, not as good as 3, better than 1, about on par with 2, we good? Okay let’s move on. I feel like we all collectively shrugged when this was first announced, that’s not to say no one was interested, but even the people wanting this probably thought it’d be one too many. The best thing this movie does, is feeling like it’s its own thing, yes this is clearly Toy Story 4, but once the story gets moving it feels the most stand alone of the sequels. The question of “is this necessary?” Is quickly replaced with the thought “this is nice” and it never needs to try hard to make you glad it exists anyway. It’s not the best of the sequels, but it didn’t have to be, it just needed to be the best version of the story it presented.

Starting with an origin of how Bo Peep was separated from our favorite toys, the movie wastes no time setting up our themes of loss and controlling our lives. Flash forwarding to post-Toy Story 3, we see how Bonnie is different from Andy, for example Woody is more like a clingy parent, seemingly unable to accept that he is largely ignored by Bonnie. It’s upon Bonnie’s first day of school where we find the story really begin, Bonnie creates Forky, a spork toy that immediately suffers an existential crisis. Woody obsesses over keeping the new toy safe to keep Bonnie happy, one mistake leads to another, eventually leading Woody to encounter his old love, Bo Peep. The situation is complicated when Forky is held hostage by Gabby Gabby and her dummy goons, resulting in a rescue mission wherein Woody will confront his own insecurities as a toy.

One of the best things this entry does is largely ditch the original cast, favoring to focus on the more necessary characters. Relax, your favorites are still here, but unlike the previous sequel our focus (outside Woody and Buzz) are the new characters who are fun in their own right, but also help lead Woody to the eventual resolution. Bo Peep is of course a returning character, but Annie Potts is allowed to give the character a new dimension that makes her far more interesting than her previous appearances, she’s practically a new character. Other new characters include a Canadian daredevil known as Duke Caboom, voiced by the ever charming Keanu Reeves, a Polly Pocket-esque toy voiced by Ally Maki, as well as scene stealers Ducky and Bunny, voiced hilariously by Keegan-Michael Key and Jordan Peele. Serving as our antagonist is Christina Hendricks as Gabby Gabby, who starts as your typical Pixar villain, but is slowly revealed to be a more tragic figure rather than villainous. It’s a terrific cast, everyone is clearly giving their all, but I feel Tony Hale’s Forky will be the favorite for many, it’s not often you get a spork that’s a bit suicidal, which is funnier than it probably sounds.

I cannot stress how happy I am that this exists, sure it didn’t need to exist, but like Forky, we’re probably better off with the existence of this. It’s undeniably the funniest entry, not just because we have some comedic greats this time, but because it has an energy missing from the last few films, without the baggage of addressing kids growing up, this installment is allowed to just play with our cast and scenarios. Along with the theme of growing up, this one also ditches certain staples of the franchise, we don’t see a Buzz who believes he’s real for example, which allows this to feel much more fresh, as well as letting Buzz shine without having to force Buzz in this position. My point is that it more than makes up for it’s status as an unnecessary epilogue, it does a ton of new things for this franchise, allowing it to feel like it’s not just another one, but a terrific film that’s pleasing on its own.

This installment is at it’s core an epilogue, the happy ending that answers any lingering questions you had about the story. It’s a bit slight in that regard, as the previous installment was the big emotional climax, more tear-jerking than this one ultimately is, resulting in this one feeling like it’s one more ending for Woody’s pleasure than ours. Still I’m just glad it exists, while the third was certainly the perfect ending, this is a solid way to reward our lead, allowing Woody to close his story in a way that is about him rather than any kid, or us for that matter. Considering what’s been said, I’m sure most adults will realize where the story is heading even without being spoiled, but just know the ending is still satisfying even if you know where it heads, maybe the emotions were oversold but they’re still there.

If there’s one minor issue I had throughout the film, it’s only with the love story aspect. Woody and Bo are great, the film’s fun and I believe their chemistry, but despite a push for this to be a rom-com, I never felt like we got something truly romantic. I get this is a family film, but that doesn’t mean we couldn’t lean more on the romance. I feel like we were missing a really touching date scene, or dance, something where the two could just connect without trying to help others. It’s a small thing so it doesn’t hurt the film, but I really do think this could’ve benefited from some more love.

No one really demanded a Toy Story 4, some were interested as soon as it was announced, others, like myself, feared it being an unnecessary extension, but it works. It’s a movie that was unnecessary, but I’m glad it exists because I needed it, it made me smile. It’s not the best sequel, not the best ending, but it’s a terrific epilogue and if we had to continue from the touching end of the trilogy, I’m glad it was with something as worthy as this.