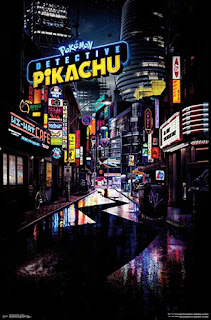 
Let’s get the most important thing out of the way first, yes I love Pokémon, I’ve loved it since I first saw the anime, played the games, got the cards, all of that, I dig the franchise. My love was always gonna factor into this film, no matter how hard I tried to separate it, I fully accept that and accept that as the target audience I may be a bit easy, but you know what? They nailed it, while some of you may believe it’s all blind love, I honestly think not.

The biggest question of this movie’s success was always gonna land on one major factor, can they make you believe in a Pokémon world? If Superman The Movie was made to make you believe that a man could fly, I imagine Detective Pikachu was made to make you believe a world where Pokémon live among us and you will certainly believe. In that regard, I believe everyone will walk out satisfied, a new, fully realized world on screen that’s like nothing you’ve seen before? Well besides the anime, but it’s in live action which does make it very fresh.

The look and believability of the world is something noteworthy, but if this is truly a good movie it needs more to back it up, which is where the movie gets more divided in reaction. Personally, I dug the story a lot, Detective Pikachu is by no means a masterpiece in the story department, but it never gets boring, somewhat predictable sure, but I thought the mystery was fun enough to carry the visuals. While the search for the father of lead character Tim Goodman (played by Justice Smith) never provides complex thinking, it does set up exciting encounters as the journey moves our heroes from one spot to another. Personally, the predictability of a certain twist never bothered me because at the end of the day this is a family feature. Sure some family movies have unexpected twists (this kinda does in another spot) but I can’t get mad if some of it gets predictable because the kids probably won’t know it right away. To punish this movie for not being more complex just feels silly, the story was fun and the kids who are a part of the target audience are bound to surprised in parts where I wasn’t, that’s okay! Would I prefer a smarter story? Something more deep and complex? Yes and I do believe we may get that someday, but I don’t mind to settle for fun and simple in this outing, the MCU didn’t reach deep or complex until after The Avengers, I’m fine if this is just the intro to better tales.

Much has already been said by non-fans of the franchise, which largely seems to be coming from critics. Before you start insulting critics who disliked this movie, let me just say you shouldn’t and they have a right to their opinion. While I feel a bit surprised to see a lot of critics being confused by the film, it would be unfair to suggest that they’re wrong, it’s the movie’s job to make them understand what they’re watching. While I felt like the movie explains the world just enough to follow along with it, I do acknowledge that “just enough” could in fact be lacking. I’ve grown up with the cartoons and played through every generation, it of course makes a ton of sense to me, but to a newcomer it may be too much info, or not enough to grasp in one film. While I’m sure some of the detractors didn’t give this movie a chance, I’m also sure a lot more did try, which is definitely a mark against the film, not a big one as realistically this is still a huge franchise, but it is bad. Again I feel like the movie explains itself enough, but if you are a newcomer I recommend taking a small crash course to the franchise, watch an episode or two, the movie, anything just to gather an idea of what to expect.

Before I start closing this off I’m sure some of you want to know how Ryan Reynolds is in the film, he’s great for the most part. While a lot of people were surprised that he was cast as the voice of Pikachu, I think he fits well, this is a snarky Pikachu, Ryan is great at snark. At times I think he strays a bit far with his quips, but consistently I just felt like he worked, largely because it actually felt like he fully understood the world of Pokémon. That’s one praise I can give to the entire cast (who are all fine, besides Smith and Reynolds who I thought were great) they all feel like they know what they’re talking about, never did any feel like they were confused talking about Pokémon.

This film is just one big love letter to Pokémon fans and I thank Rob Letterman for nailing that much, between directing this and the first Goosebumps, it’s clear he gets how to make nostalgia pieces. While the story never becomes groundbreaking work, it is solid and enjoyable, held together by amazing visuals (some shots in this are just beautiful) and worldbuilding. I think Ryan Reynolds and Justice Smith make for a great team, I hope Kathryn Newton and her Psyduck get more to do in a sequel (maybe even spin-off) cause they’re fun here, and I just loved seeing all the Pokémon populate the screen. Detective Pikachu is the best videogame movie, which is not a high bar to clear, but this movie just made that bar high. Highly recommend it to fans, especially longtime fans, newcomers can enjoy too, but I recommend a crash course if you don’t feel like you know enough, personally I just loved it.