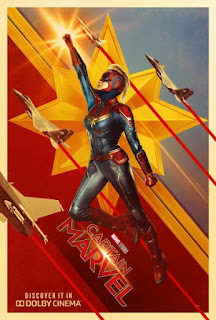 
At this point it’s a safe bet to assume that every Marvel Studios movie will be fine, I’ve reviewed nearly all of them (missed Ant-Man & The Wasp, thanks depression and busy schedule) and I’ve yet to see a stinker. If you were expecting Captain Marvel to be their first failure than you are in for a surprise. Now just to be clear, I don’t think that Marvel will never fail, everyone eventually does, but until that day comes I’ve yet to see reason to expect an outright bad film from them.

As for this movie? Yeah It’s a ton of fun, all those whiny internet trolls are wrong (of course) and we really need to find a way to stop letting them intoxicate every film discussion. It’s not the best we’ve seen from the MCU but to expect every new movie to be “the greatest” just ruins the joy, sure I like seeing a new masterpiece, but I’ll be fine watching a new entertaining movie. Obviously not everyone well enjoy this as much as I do though, it has it’s issues, nothing I personally consider major, but I get if others find more problems with the movie. My point is that yes, the film is entertaining, but it is a film, like any other film not everyone will enjoy it like I did, that’s fine, it’s just a shame that it becomes harder to talk about the flaws when idiots online decide to trash the film for the most nitpicky reasons, pretending that they “aren’t sexist”.  Liking this movie won’t make you a feminist, hating it won’t make you sexist, but actively making insulting insinuations about Brie Larson, brigading film sites with negative reviews despite not seeing the film and flat out attacking women who support the film will make you sexist trash.

Sorry for the rant, I condensed it, but I really am just tired of going through this motion with anything not starring white men, other people exist ya know?

Soooo, Brie Larson, she’s awesome and surprising me, she made for an awesome Captain Marvel. Yes you read that right, I was surprised I liked her so much in the role, I never thought she’d be bad, I just didn’t expect to love her this much. I consider myself a Carol Danvers fan, she’s one of my favorite Marvel characters, as well as possibly my favorite female superhero, I’ve always adored seeing how she tries to improve from the awful situations writers have placed her throughout her history. With my love of the character came fear that Brie may not live up to that, I was certainly excited by the trailers, but I always viewed Carol as a mature woman, so seeing a younger face I wondered if Brie could even live up to that, turns out she surpassed it. The great secret to Marvel’s success is that they aren’t catering to me, nor are they catering to the hardcore fans, they’re catering to the world, Carol, Captain Marvel, is catering to people who aren’t me, in doing so I see a character who feels real, inspiring to people who’ve yet to be inspired. When I saw Captain Marvel on screen my fears of a performance that would at best be passable were gone, I saw a defining portrayal of the character who was inspiring plenty of new fans the way I once was, which made me happy, happier than if I had gotten what I wanted.

On the supporting cast side, we get some highlights, but disappointingly we also get some characters that are passable and nothing more. Much has been said about Samuel L. Jackson so I’ll keep it short, but he’s the most fun he’s ever been in these movies, the effects are also amazing so I’m hoping this movie gets an Oscar nom for him alone. Ben Mendelsohn steals the show alongside his identity stealing powers as the skull known as Talos, it was a delight to see him hunt for our heroes. Of course most have already seen Goose, the adorable feline that runs away with the film much more than you’d expect from the trailers, which rounds up our scene stealers of the film. I really don’t want to sound like I’m trashing Jude Law, Djimon Hounsou, Lee Pace, Lashana Lynch and the rest, because I do think everyone is fine in the movie, I just also wasn’t impressed. I get it, this is Carol’s show, but we’ve seen Marvel movies with exciting supporting casts, especially after Phase 1, I just didn’t get excited here, it’s not bad, it’s just disappointing that most do their job well, but not much else.

In case you’re wondering why I’ve yet to discuss the story it’s because the movie takes some interesting turns that would be spoiling a lot, so to keep it brief Captain Marvel, or Carol, has to stop the Skrull invasion, per the orders from the Kree empire, all the while she regains memories of her past. To give more would be to ruin the surprise, but it’s hard not to talk about the story without discussing them, so I’ll be doing that shortly. For now, the movie starts slow, but once Earth comes into play the story really picks up and by the third act I loved the movie enough to put it somewhere in the middle, possibly just above in my ranking of the MCU. It’s a 3 OUT OF 4, so go watch the movie, I’ll be going a little more in depth now, so see ya later if you’re leaving now.

Okay so it probably should’ve been more obvious, but the Kree are definitely the bad guys here, I expected hints of it, but was surprised to see the movie just go all in to say “no, everything about these guys are bad”. While the marketing was selling an alien invasion film, somewhere toward the third act we realize that the Skrulls are actually not invading us for world conquest, they just want to survive. As we learned in Guardians of the Galaxy, the Kree think highly of themselves and purge those they deem unfit, that was Ronan’s thing, we further get that here. So yes, the Skrull’s are not evil here, they’re just refuges being persecuted by the Kree empire because the Kree consider them an infestation (pretty on the nose metaphor, but you know what? It’s relevant and it works). Turning the invasion aspect into that of assimilation for survival, it’s actually an interesting change from the comics that beautifully reflects the world as art often does. I can see a lot of toxic fans taking issue with this, but I imagine they might be more angered by the change in Mar-vell, which barely amounts to much, so by all means, cry you toxic gatekeepers, we’ll move on and enjoy things while the list of things that anger you grows. Back the point though, I just loved that what starts as a simple sci-if film about bad aliens turns into a fun, inspiring and thoughtful film about refuges, corrupt empires and women empowerment.

The film isn’t flawless,, but it sticks to landing the important beats just enough to make this another worthy Marvel entry, 3 OUT OF 4, I hope you enjoy,or at the very least don’t turn into a sexist brat if you’re left feeling disappointed.